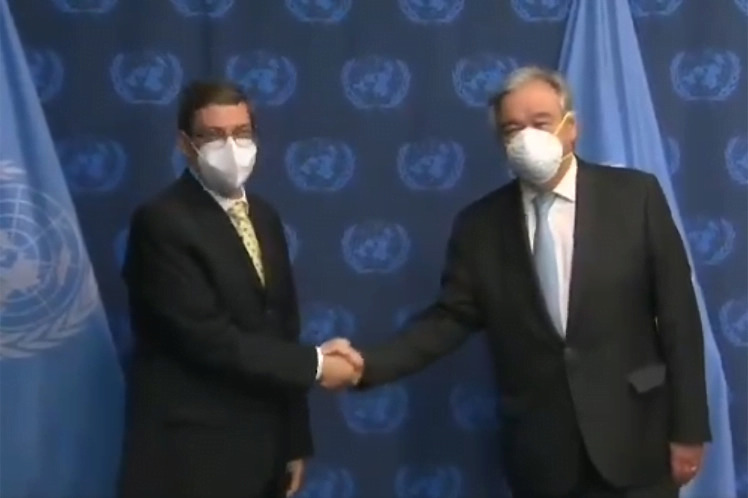 United Nations, June 21 (RHC)-- Cuba's Foreign Minister Bruno Rodriguez today described his meeting with United Nations Secretary-General Antonio Guterres this Monday as fruitful, on the occasion of his visit to the UN headquarters.

On Twitter, the Foreign Affairs Minister ratified his country's support for the strengthening of multilateralism.

He also voiced Cuba's support for strengthening multilateralism and unrestricted respect for the purposes and principles enshrined in the United Nations Charter.

Last Saturday, Rodriguez arrived at the UN headquarters to participate in the upcoming General Assembly vote against the U.S. blockade of the Caribbean nation.

For more than 25 years, most member countries have described the policy as a flagrant violation of international law and the United Nations Charter and considered it the main obstacle to the development of the Antillean territory.

Next Wednesday, the General Assembly will vote again on the report 'Necessity of ending the economic, commercial and financial embargo imposed by the United States of America against Cuba'.

In 2019, the draft resolution was approved by an overwhelming majority, with 187 votes in favor, three against (the United States, Israel, and Brazil), and two abstentions (Colombia and Ukraine).

The vote, initially scheduled for 2020, was postponed to this year due to the Covid-19 pandemic.