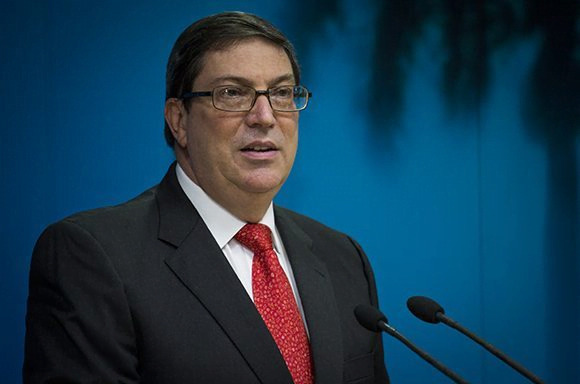 Havana, November 10 (RHC) The Cuban government roundly denounced the maneuvers orchestrated by the United States aimed at subverting the internal order and provoking a regime change in the Caribbean island.

In a meeting with the Diplomatic Corps accredited in Havana, Foreign Minister Bruno Rodríguez Parrilla warned on Wednesday that in no way will the persistent U.S. aggression, intensified in recent months, to generate conditions of internal destabilization, be allowed to spoil the moment of recovery and joy that the country is experiencing with the control of the COVID.

He added that in their attempts, the U.S. centers of power use for their anti-Cuban purposes potent communicational machinery, particularly digital, which tries to build from lies and unreality a non-existent virtual scenario on the island.
In the appearance, Rodriguez pointed out that the aggression from abroad, with the use of internal agents, recruited, financed, and organized by the U.S. government, seeks to harm the economic and social reopening of the country.
"With strict adherence to our Constitution and the consensus that characterizes us, the people will defend public order," he emphasized.
The Foreign Minister warned that what is at stake now is the right of a sovereign state to exercise self-determination against the attempt of a superpower to intervene in its internal affairs, force a regime change, and destroy the constitutional order for strictly political motivations.
"The right of the Cuban people to peace, stability, tranquility, and citizen security is being settled."
He added that since September 22, 29 U.S. government statements had aimed to encourage, guide, and instigate destabilization actions in Cuba. Likewise, he maintained that the U.S. Embassy in Havana, with 59 tweets,  has openly supported the opponents and has tried to talk about alleged humanitarian aid from the Biden Administration to the Cuban people.

"They lie shamelessly. There has been no offer of humanitarian aid from the U.S. government to Cuba or any kind throughout the entire pandemic, not even when the oxygen-producing plant broke down were they offered."

At another point in his appearance, Bruno Rodriguez pointed out that while Washington continues to prevent family reunification and the normal migratory flow between the two countries, it is now also adding the limitation of not recognizing Cuban vaccinations for Cubans traveling to that country.
However, he noted, it is surprising how  Washington encourages the illegal migration of Cubans across its southern border.