Diaz-Canel recognizes the unity of health professionals against Covid-19 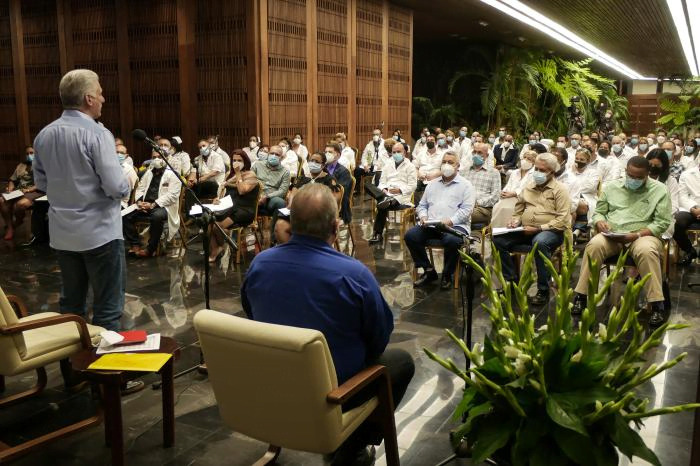 Havana, November 18 (RHC)-- Cuban President Miguel Díaz-Canel acknowledged on Thursday the unity of health professionals in the fight against Covid-19 during a meeting with representatives of the sector.

The president praised the work of the new generations and the performance of the military hospitals in the tensest moments of the pandemic.

"All of us together contributed a lot. This shows how different is the role of the armed forces in Cuba," he said, quoted by the Twitter account of the Presidency.

In the meeting, which Dr. Carlos Vázquez also attended, agent Fernando of the State Security Organs, the head of state, considered his presence an honor.

The doctor, a first-degree specialist in General Comprehensive Medicine and Oncology, revealed his identity as an agent to expose the destabilizing intention of a march called for November 15 by the self-styled Archipelago platform.

Díaz-Canel also thanked the young people who showed courage and preparedness in the face of Covid-19, recognizing the work of Dr. Yordis Lázaro Mederos, from Batabanó, who at the age of 28 took over the direction of Health in that municipality in the province of Mayabeque (west) amid the pandemic.