Progressive International travels to Cuba to help vaccinate the world 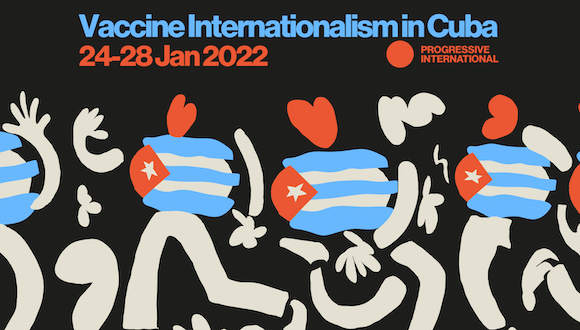 Havana, January 24 (RHC)-- On January 25th, Cuba’s leading scientists, government ministers and public health officials will participate in a special briefing live from Havana, coordinated by Progressive International, as part of its Union for Vaccine Internationalism, founded in June 2021.

Participants will provide detailed information on the mass immunization campaign in Cuba, using homegrown vaccines and Cuba’s assistance to other nations in the confrontation of Covid-19, this amidst Washington’s economic blockade.

David Adler, general coordinator of Progressive International, will deliver the opening remarks, followed by the director for innovation of Cuba’s Biopharmaceutical Business Group BioCubaFarma, Rolando Pérez, who will speak about Cuba’s vast experience in the development of vaccines and about the five Cuban immunogens against Covid-19, including three approved vaccines and two other vaccine candidates still under research.

Then, Dr. Olga Lidia Jacobo, the director of the Center for State Control of Medicines, Medical Equipment and Devises (CECMED), Cuba’s regulatory authority, will speak about the health protocols and the safety and efficacy rates shown by the Cuban immunogens.

Finally, the director for Science and Technical Innovation of the Cuban Ministry of Health Ileana Morales and Italian researcher Fabrizio Chiodo will speak about Cuba’s health internationalism and how the small island nation can help immunize millions of mostly poor, under-vaccinated people around the world.

The special briefing will end with a Q & A segment. Other Cuban experts will also be available to answer questions. These include the director for research of the Finlay Vaccines Institute, Dr. Dagmar García and the director for Biomedical Research of the Center for Genetic Engineering and Biotechnology, Gerardo Guillén.

Progressive International issued a communique last Wednesday, blasting the decision of the Dutch multinational bank ING to block all donations supporting the trip of a delegation from the Organization to Cuba, to promote the Caribbean island's effort to vaccinate the world against Covid-19.

As the coronavirus crisis enters its third year, new infections have reached record levels globally. Meanwhile, access to lifesaving vaccines remains starkly unequal. Several countries are administering booster shots, before most of the world's poorest inhabitants have been given their first jab.

Nearly 9.8 billion Covid-19 vaccine doses have been administered globally to date. More than 70% of people in high-income nations have been fully inoculated, but just 9.6% of people in low-income countries have received at least one shot due to dose hoarding by wealthy governments and knowledge hoarding by pharmaceutical corporations, whose profit-driven refusal to share publicly funded vaccine formulas has generated artificial scarcity.

Progressive International notes that amidst this crisis of global solidarity, Cuba has emerged as a powerful engine of vaccine internationalism. Not only has the island nation successfully developed three Covid-19 vaccines with over 90 percent effectiveness, and vaccinated more than 90 percent of its population with at least one dose of its homegrown vaccine, Cuba has also offered its vaccine technology to the world.

About this, Dr. Vicente Vérez Bencomo, director of the Havana-based Finlay Vaccines Institute said: “We are not a multinational where returns are the number one reason for existing. For us, it’s about achieving health.”

Some weeks ago, Progressive International launched a campaign, asking for contributions so as to send a delegation here to Havana to, as they say, combat misinformation, to defend Cuban sovereignty, and to help vaccinate the world.

Progressive International has convened Cuban scientists and government representatives to address international press and members of the scientific community on January 25th on Cuba’s efforts to develop and produce its own vaccines and its expressed willingness to share them with the rest of the world.