Cuban president talks with executive director of Pastors for Peace 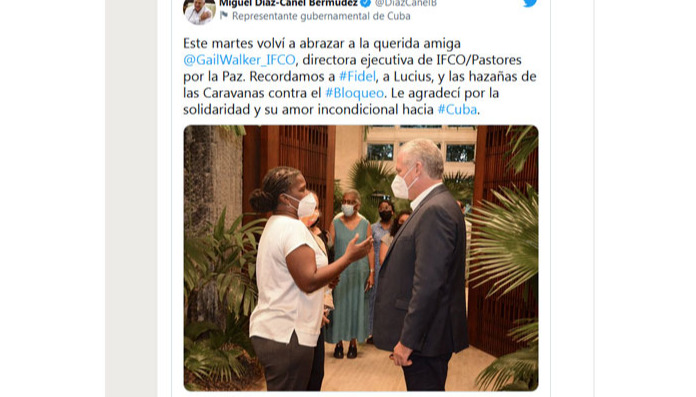 In a message published on the social network Twitter, the president said that during the meeting, "we remembered Fidel, Lucius, and the feat of the Caravans against the blockade," while thanking her for the solidarity and her unconditional love for Cuba.

Gail Walker highlighted: "It is always a pleasure to be with my brother Miguel Díaz-Canel.  We will continue to fight the lies about Cuba."  Pastors for Peace is a project of the Interreligious Foundation for Community Organization and was born in 1988 in response to the aggressive policy of the then U.S. President Ronald Reagan against Latin American countries, according to the Foreign Ministry's website.

Last November, the Cuban President himself met with members of the 31st Pastors for Peace Caravan, on that occasion made up of 72 caravanistas from the United States and Germany.