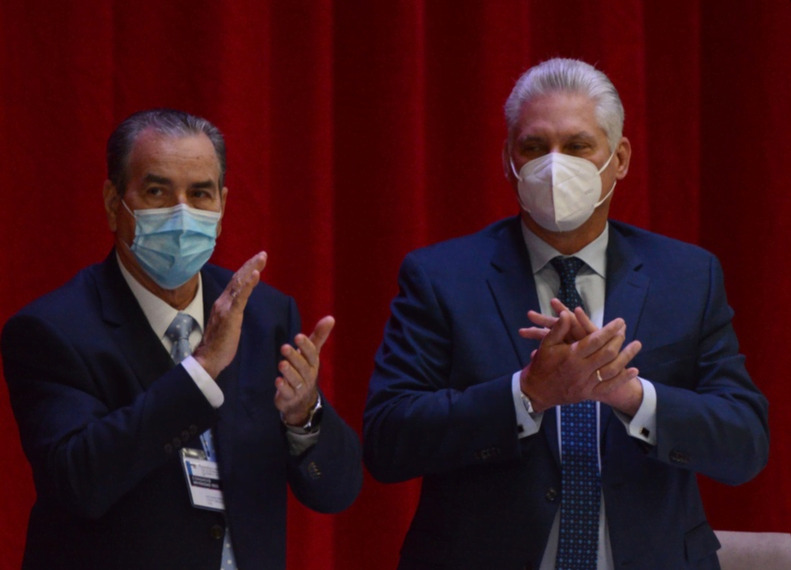 Díaz-Canel (R) and Saborido on the closing day of the event. Photo. Marcelino Vazquez

Havana, February 11 (RHC)-- The XIII International Congress 'University 2022' concluded Friday in Havana with the definition of higher education priorities and the need to expand its contribution to sustainable development.

The event, which lasted five days at the Palacio de Convenciones in hybrid mode (virtual and face-to-face), gathered around 1,800 participants who took part in 47 conferences and 63 panels, and also presented 1,635 papers.

A large part of the debates focused on the essential inclusion in education and the urgency of guaranteeing education based on innovative and quality methods.

The inaugural conference was given by the first secretary of the Communist Party of Cuba and president of the Republic, Miguel Díaz-Canel, on the government management system, which has among its fundamental pillars science and innovation, in whose categories the role of academia as a promoter of knowledge and cutting-edge research is indispensable.

Other topics revolved around the social role of the contemporary university, university management with a vision of science and innovation, the work of the centers in the territories and their role in local development, as well as the gender approach.

In particular, the contribution of interface societies and scientific-technological parks, new organizational forms that have emerged in Cuba, especially linked to universities, which are their shareholders, was discussed.

The Head of State ratified before the representatives of more than 35 countries that even though this system requires a lot of learning in the country, progress is being made as a whole.

"The path of knowledge is our path, and universities are key to it," concluded the President, who also attended the closing ceremony.

The Food Sovereignty and Nutrition Education Plan, the internationalization of education, the improvement of postgraduate programs and university extension also stood out among the issues to be discussed.

One of the special guests was popular educator Frei Betto, who in his lecture called on professionals in the sector, both from the largest Antillean island and other nations, to promote inclusion and sustainability from their centers.

Unlike capitalist countries, in Cuba education is not only aimed at training highly qualified labor force, but its institutions are identified with human subjectivity: values, morals, ethical principles.

For the theologian, the challenges of teaching in the context of transition to the post-Covid-19 world are digital networks and the disease itself, so it is urgent to rethink the educational processes.

In preliminary conclusions, José Ramón Saborido Loidi, head of Higher Education, stated that the event served to promote dialogue between institutions from almost all continents, and dozens of bilateral agreements were signed with the participating countries, among them Romania, Panama, Mexico, Russia and the United Arab Emirates.

During the five days of sessions, a significant number of institutions of higher learning located throughout the country showed their main projects and achievements at the exhibition stands in the Palacio de las Convenciones.

Finally, the next edition of the Congress has been called for February 2024, with Havana as the venue once again.