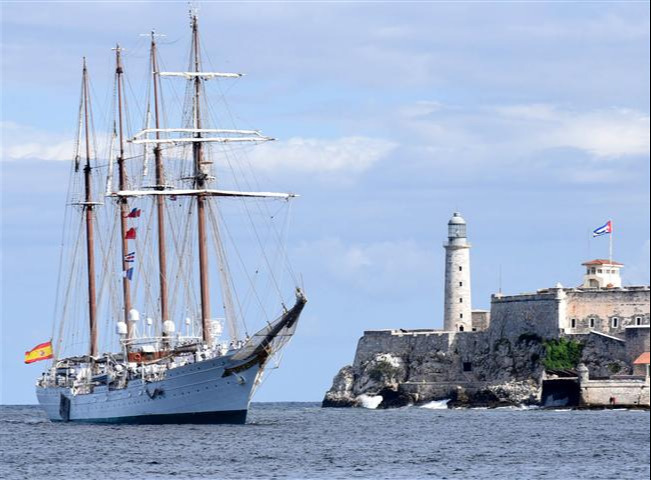 Havana, May 12 (RHC) The Spanish Navy training ship  Juan Sebastián de Elcano docked Thursday at the port of Havana for a four-day call in Cuba.

Following tradition, at the entrance to the bay, the ship fired 21 salvos as a salute to the city, which were answered by a battery from the San Carlos de la Cabaña fortress.

During the visit, its thirteenth to Cuba, the ship will combine diplomatic and military activities with educational conferences and open-door sessions for Cubans to go on deck.

As it approached the harbor, the ship was greeted by dozens of people. The crew was welcomed by Captain Juan Vázquez Reyes, department head of the Revolutionary War Navy (MGR), and the ambassador of the European nation, Angel Martín Peccis.

In statements to the press, Captain Manuel García Ruiz and Ambassador Martín Peccis expressed that this visit ratifies the historic bilateral ties and condolences to the families of the accident victims that occurred last week at the Saratoga Hotel in Havana.

The ship's captain expressed his satisfaction for the warm welcome that the people of the Cuban capital have given to the sailors of the Juan Sebastián de El Cano on all occasions, which shows the strong ties, including family ties, between Cuba and Spain.

Later, as part of the program, the captain paid a courtesy visit to the MGR headquarters, where he was received by Rear Admiral Luis Reyes López, second in command of that armed institution.

The senior officer expressed to the guests that in Cuba they will find a supportive and brotherly people and wished them the greatest success in this new stage of navigation that will last for five months in an extensive tour of ports in several continents.

During their stay, the sailors will hold meetings with city authorities, a tour of the historical case and joint activities with midshipmen from the Granma