Parliament condemns Cuba's exclusion from Summit of the Americas 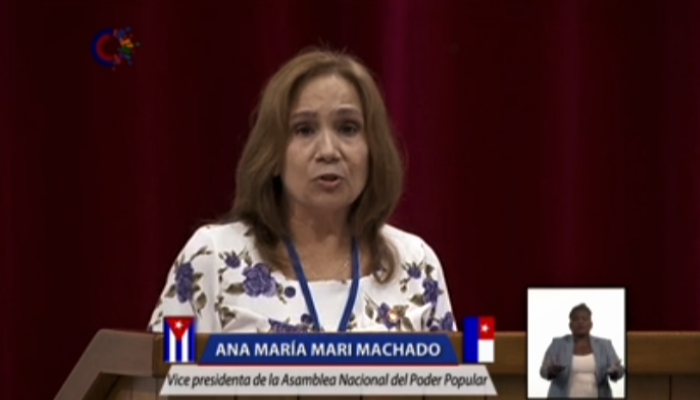 Havana, May 14 (RHC)-- On the first day of the Fifth Extraordinary Session of the National Assembly of People's Power, in its Ninth Legislature, Deputy Ana María Mari Machado, Vice President of the Cuban Parliament, read a Declaration issued by the International Relations Commission on the Summit of the Americas.

The full text of the Declaration was endorsed by the plenary of the National Assembly of People's Power. Its full text follows:

In recent days, high-ranking officials of the U.S. Government have ratified their intention to exclude Cuba from the next Summit of the Americas scheduled to be held between June 8 and 10, a position that is totally identified with the demands and pressures of the sectors of the anti-Cuban extreme right and their main spokespersons in the U.S. legislature. There is not a single reason that justifies the exclusion of any country of Our America from this meeting.

The International Relations Commission of the National Assembly of People's Power expresses its full support to the pronouncements and denunciation made last April 25 by comrade Bruno Rodríguez Parrilla, Minister of Foreign Affairs, in view of this new aggressive act of the United States against Cuba, including the strong pressures and threats that the U.S. government exerts on numerous Latin American and Caribbean governments, trying to silence their legitimate claims in favor of the presence of Cuba in the so-called continental meeting.

Rejects the systematic campaign of lies and disinformation promoted by the United States that tries to show the world a reality that does not exist in Cuba and for this purpose, creates fake news, manipulates images, lies about alleged persecuted, tortured and disappeared people.

With unparalleled cynicism, Cuba is included in spurious and unilateral lists such as those of countries that promote terrorism and human trafficking, among others, all in an attempt to justify its criminal policy of economic asphyxiation, attempted political isolation and promotion of subversion, aimed at trying to achieve what they call regime change and with it the overthrow of our Revolution.

Reiterates its condemnation of the economic, commercial and financial blockade imposed by the United States against Cuba, which has been in place for more than 60 years and constitutes a flagrant and systematic violation of the human rights of all our people, which qualifies as an act of genocide and has been rejected by the international community in 29 successive resolutions of the United Nations General Assembly.

Denounces the actions of the government of the United States in deliberately, opportunistically and to unprecedented levels, intensifying the blockade in the context of the pandemic of COVID-19, with the application of 243 new measures of economic coercion that remain in force to the fullest extent under the current administration of President Biden.

Sincerely appreciates the dignified and supportive position of governments, parliaments and peoples of our region that demand from the United States that Cuba not be excluded from the IX Summit of the Americas, and that an end be put to the criminal policy of economic strangulation against Cuba. Their demand in defense of Cuba's participation on equal terms deserves the utmost respect and appreciation. Their solidarity is totally genuine and constitutes a spontaneous response to the discriminatory action against countries of the region, which reflects the feelings of the peoples of Our America, whose voice has been heard.

Cuba supports genuine efforts to promote integration based on civilized coexistence, peace, respect for diversity and solidarity throughout the hemisphere, and has a widely recognized legacy to back it up. We support, without reservation, any legitimate proposal for concrete solutions to the most pressing problems facing our peoples.

The U.S. government is deceiving itself by trying to silence the calm but firm voice of Cuba in favor of the right of the Latin American and Caribbean peoples to defend their sovereignty, their desire to build fairer and more inclusive societies, to live in a world of peace and against the imposition of imperial mechanisms and designs. As the Cuban Foreign Minister pointed out, the United States should understand once and for all that the Latin American and Caribbean region has changed forever, and that there is no room for the reinstatement of the Monroe Doctrine and the Pan-Americanist vision against which José Martí fought and against which we will continue to fight with firmness and loyalty".