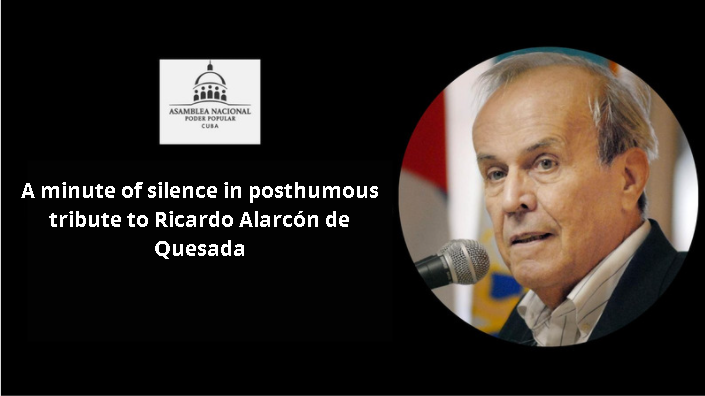 Havana, May 14 (RHC)--The National Assembly of People's Power, meeting in the 5th extraordinary session of its 9th legislature, paid tribute to Ricardo Alarcon de Quesada, the prestigious diplomat, and politician who served for two decades as president of that legislative body.

Alarcon passed away on May 1, a few days shy of his 75th birthday.

The President of the Parliament, Esteban Lazo Hernandez, recalled that from an early age, Alarcon was linked to the revolutionary struggle and accumulated a brilliant record of service to the Revolution for which he received the recognition of the Cuban people.

In his outstanding career, he said, stands out his responsibilities as president of the Federation of University Students, permanent representative of Cuba to the United Nations, vice-minister, and minister of Foreign Affairs.

Likewise, Lazo pointed out that Cuba remembers his long diplomatic and political battles in different forums, his struggle in favor of the returning to the country of the child Elián González, and of the Five Heroes unjustly imprisoned in jails in the United States.

"We can never forget that Alarcon was President of this National Assembly for 20 years," Lazo stressed.

In posthumous tribute to the life of Alarcon, the Parliament observed a minute of silence.