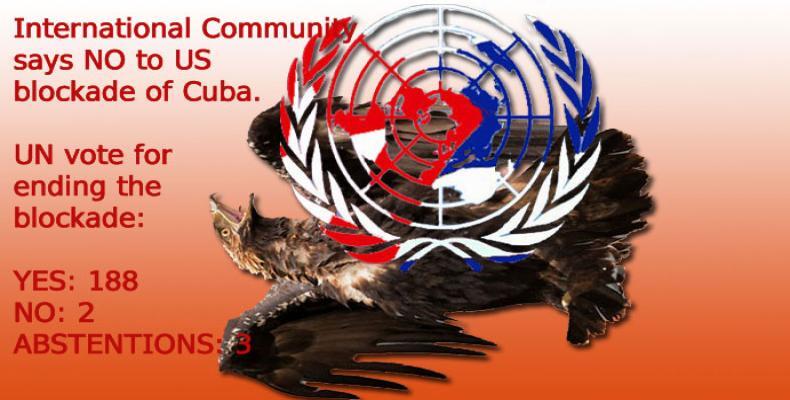 United Nations, October 28 (RHC)-- For the 23rd consecutive year, the vast majority of the international community represented at the UN General Assembly rejected the U.S. economic, commercial and financial blockade of Cuba and demanded an end to the criminal policy.

The UN resolution entitled “Necessity of ending the economic, commercial and financial embargo imposed by the United States of America against Cuba” was approved on Tuesday with 188 votes in favor, three abstentions and only two votes against.

As is traditional, the United States and Israel were isolated in their defense of Washington's hostile Cuba policy, while Palau, the Marshall Islands and Micronesia abstained from voting.

Before the vote, 22 speakers on behalf of their respective nations and regional blocs took the floor to condemn Washington's extraterritorial policy that has been in place since 1962, despite repeated calls by the international community to end the blockade.

Speakers at the General Assembly agreed that the blockade policy constitutes a flagrant and systematic violation of the basic human rights of the Cuban people and of other nationals, including U.S. citizens, whom the blockade prevents from excercising their constitutional right to travel freely to the Caribbean island nation.

The Ambassador of the Plurinational State of Bolivia to the United Nations, Sacha Llorenti, spoke for the Group of 77 plus China. Lloreni denounced the financial persecution imposed on Cuba by the U.S. government. On behalf of the 134 nations that make up the international forum, the Bolivian diplomat strongly rejected the inclusion of Cuba on the list of countries that allegedly sponsor terrorism. And Ambassador Llorenti said that despite the limitations of the U.S. blockade, Cuba has provided generous assistance to people around the world, as demonstrated by more than 50,000 health care workers who provide services in 66 countries.

The representative of Malawi, on behalf of the African Union, said: "The African Union is adding its voice to the necessity of ending the economic, commercial and financial blockade imposed on Cuba by the U.S. administration for over 50 years.” He recalled that every year, the international community demands the immediate lifting of that siege, but the blockade does not end. "During the assembly of the African Union in June this year, the full support of this group of countries to the Cuban resolution to lift the blockade was reiterated."

And the Russian delegation to the United Nations General Assembly called on Washington to immediately end its blockade against Cuba.