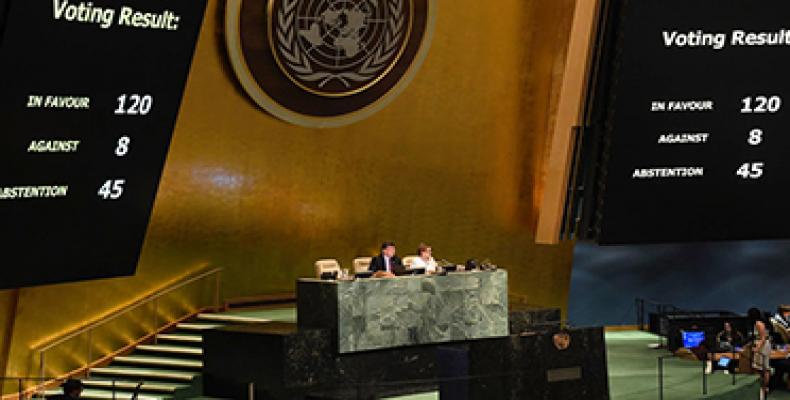 United Nations, June 14 (RHC)-- In an emergency meeting on Wednesday, the United Nations General Assembly adopted a resolution calling for greater protection for Palestinians, and deploring Israel disproportionate use of force against protestors.

The emergency session of the 193-member Assembly, took place following weeks of violence along the border of the Gaza Strip – the Palestinian enclave blockaded by Israel – where hundreds of thousands of Palestinians participated in “the Great March of Return” protests, beginning at the end of March.

More than 120 Palestinian civilians were reportedly killed by Israeli forces while participating in the protests against Israel’s years-long blockade.

The Arab-sponsored resolution received an overwhelming support. It was adopted by a vote of 120 in favor, 8 against, with 45 abstentions.

The United States tried to water down the text by proposing an amendment requesting condemnation of the rockets fired from Gaza into Israeli territory. It was voted prior to the resolution and it did not secure the two-thirds majority support needed.

The resolution adopted is identical to the text that was vetoed by the US in the UN Security Council on June 1st.

The document deplores the use of excessive, disproportionate and indiscriminate force by the Israeli forces against Palestinian civilians in the Occupied Palestinian Territory, including East Jerusalem, and particularly in the Gaza Strip, including the use of live ammunition against civilian protesters, including children, as well as medical personnel and journalists, and expresses its grave concern for the loss of innocent lives.

It also demands that Israel, the occupying Power, refrain from such actions and fully abide by its legal obligations and responsibilities under the fourth Geneva Convention on protecting civilians in times of war.

It also requests that within 60 days the Secretary-General present his “proposals on ways and means for ensuring the safety, protection and well-being of the Palestinian civilian population under Israeli occupation, including “recommendations regarding an international protection mechanism.”

The text also “deplores the firing of rockets from the Gaza Strip against Israeli civilian areas,” but does not single out Hamas as being responsible for such launches.