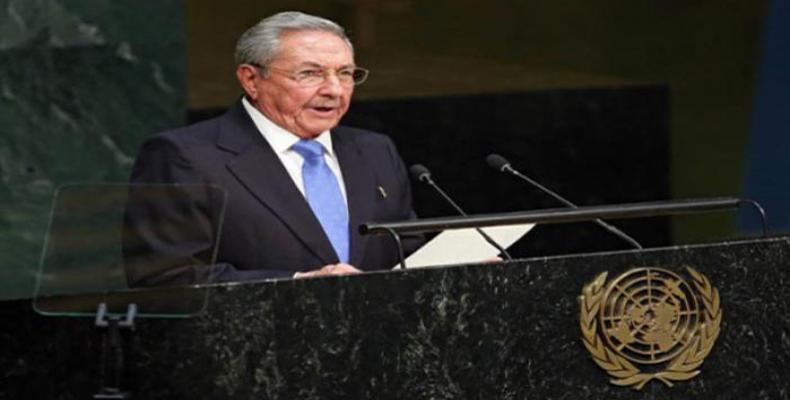 New York, September 29 (RHC)-- Media from around the world are echoing the speech by President Raul Castro at the high-level segment of the 70th Session of the General Assembly of the United Nations.

"Raul Castro calls for the territory illegally occupied in Guantánamo to be returned to Cuba," headlined Today, a Russian TV network in an article on its website, citing the insistence of the Cuban president in ending the blockade as a condition for the establishment of fully normalized relations with the United States.

On the same subject, the British network the BBC said Raul Castro called on Washington to compensate the Cuban people for the economic and human damage Cuba suffered due to the blockade.

Meanwhile, teleSUR TV highlighted the words of the Cuban president regarding the policy of the economic, political and financial blockade of the United States. Other media outlets in Caracas cited parts of the speech in relation to the unconditional support of the Caribbean country to the Bolivarian government of Venezuela against the destabilization attempts by the right wing.

Publications around the world referred to Raul Castro's emphasis on Cuba's support for Latin American causes, such as the right to independence of Puerto Rico, the return of the Malvinas Islands to Argentina and the end of the attacks against legitimate governments like Rafael Correa in Ecuador and Dilma Rousseff in Brazil.