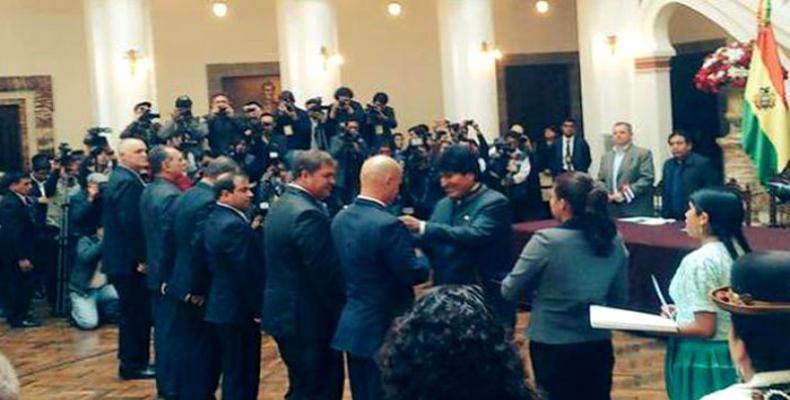 La Paz, October 5 (RHC)-- Bolivian President Evo Morales has awarded The Cuban Five and Colonel Orlando Cardoso with the Marcelo Quiroga Order.  The ceremony was held in La Paz on Monday, attended by ministers of the government, the presidents of both chambers of the legislature and ambassadors of several countries.

The Bolivian president said that he considers the Cuban Five, Heroes of the Republic of Cuba, as heroes of Bolivia as well.  Speaking at the Palacio Quemado, Evo Morales said it was an honor to receive Gerardo Hernandez, Ramon Labañino, Rene Gonzalez, Fernando Gonzalez and Antonio Guerrero, as well as Colonel Orlando Cardoso, another Cuban Hero who suffered for 11 years in jails in Somalia.

President Evo Morales said that the freedom of the Five was "not only a victory for Cuba, but a victory for all our countries."  The six Cuban heroes are visiting Bolivia this week, after having visited Ecuador at the invitation of President Rafael Correa.