Cuba: child and elderly care in times of Covid-19 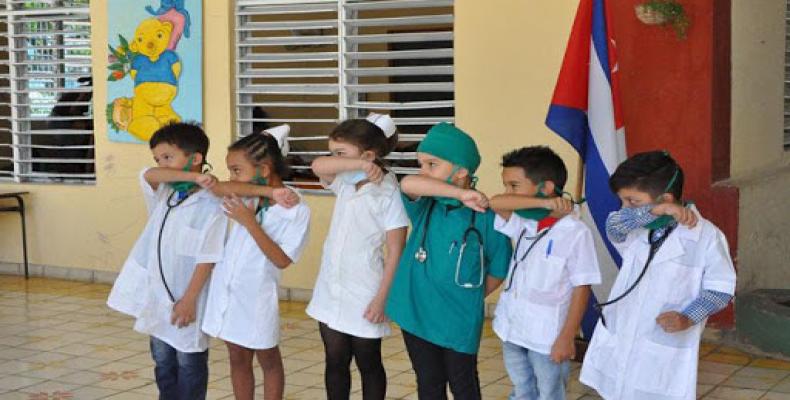 During a televised roundtable discussion, aired over the weekend, Cuban health experts spoke about the country’s approach to the Covid-19 pandemic, particularly care for two highly vulnerable population groups –children and older adults—and the role being played by Cuban scientists in the fight against the pandemic.

Dr. Liset del Rosario López González, head of the National Group on Pediatrics of the Cuban Ministry of Health explained that over the past nearly three months since the first cases of Covid-19 emerged here in Cuba, the case incidence rates within the country’s childhood population somehow differ from the rest of the world in that our country registers higher numbers of children infected with the disease. Cuban children account for 10 to twelve percent of the overall number of cases, with children over 10 being the most affected.

So far, 13 babies under one have been diagnosed with the disease, representing 5% of the total of laboratory confirmed Covid-19 patients on the island.

The expert called attention that although the childhood patients on the island have progressed favorably, as none has developed any serious complication, and in fact they have experienced only mild symptoms of the disease, this is a highly vulnerable population group, specially babies. They are the ones, she said, who have required the most health intervention and therapeutics, including the use of ventilators.

She then called on families to exercise physical distancing and limit direct contact with their babies to the immediate family only.

The Cuban pediatrician stressed that over 90% of Cuban children diagnosed with Covid-19 have already recovered and were discharged from hospital. She insisted that respiratory infections are a major cause of childhood disease and even death worldwide.

She pointed to cough and fever as the most common symptoms among childhood patients. She noted though that over the past month or so, most new cases registered within this population group have been asymptomatic. She said this result is in large part attributable to the country’s overall approach to the disease. She then pointed to the active screening campaign in the communities to trace and detect cases early, and the decision to begin applying the treatment protocols right from the moment these kids are considered suspected cases, even before they are diagnosed with the disease.

“The impact of the treatment protocol has been favorable. The established treatment protocol for Covid-19 childhood patients in our country includes three medications –kaletra, chloroquine and interferon. A distinctive feature in our country, is that patients under three are being administered the Cuban interferon. The results obtained have been favorable. More than 88% of childhood patients have been administered Interferon. None of them has developed any complication associated with the use of this or the other two medications.

“Childhood patients, who have developed mild symptoms of the disease have improved their clinical condition within just three days of applying this treatment protocol. This is the case also of patients who have developed pneumonia or other imaging chest diseases.

“We can categorically charge that the protocol applied here in Cuba to childhood patients with Covid-19 has been effective.”

Dr. Liliam Rodríguez Rivero, Director of the Research Center on Longevity, Aging and Health noted that 28.8 % of the Cuban population is 60 or over. She explained that since the first cases of the Covid-19 disease emerged in our country, care for the elderly was at the center of measures adopted by the Cuban government and the national health system, given that they are highly vulnerable to infection with the Sars-Cov-2 virus and develop more serious, even lethal complications from the Covid-19. Studies worldwide reveal that case fatality rates from the disease are higher among people over 60.

In Cuba, over 63.7% of patients, who develop serious complications are 60 or over, and they account also for over 80% of Covid-19-related deaths.

She pointed to a decision adopted in late March to administer the Cuban drug Biomodulina T to older adults, as preventive medicine to strengthen their innate immune system to better respond to this and other respiratory infections.

Dr. Rodríguez Rivero explained that in a first stage, the medication is being administer to older adults in senior citizens’ homes because besides their advanced age, they present other risk factors as well, such as the fact that they are surrounded by and are in permanent close contact with other vulnerable people just like them, people with underlying health conditions. Added to this, she said, is the fact that older adults are more likely to develop acute respiratory infections.

Cuba has 155 senior citizens’ homes. Over 8 thousand older adults live in those homes. The decision was then made to administer two doses of Biomodulina T vaccine every week per patient for six weeks for a total of twelve doses apiece.

The results obtained are very encouraging, said the Cuban geriatrician. She pointed to a sharp decrease by 40% in the incidence, hospitalization and mortality rates associated with acute respiratory infections.

“Besides, the medication has proven safe. Of the total population already vaccinated, over 80% of the targeted older adults, only 14 have developed side effects. I should say here that these 14 patients developed what we call common, mild side effects –fever, face crash- which are easily treated with antihistamines or antipyretics. We should also note that all older adults were consulted and they gave their consent.”

Produced by the Havana-based Center for Biopreparations BioCent –an entity attached to Cuba’s BioCubaFarma Group-- Biomodulina T has proven effective in the treatment to recurrent respiratory infections.

With over 20 years of usage, Biomodulina T is a natural product. Currently, there are clinical studies underway to expand its use to the treatment of different types of cancer, HIV-AIDS, multiple sclerosis, rheumatoid arthritis, hepatitis B and severe sepsis.

Cuba’s interferon, considered a wonder product of Cuba’s biotechnology, has also proven effective in the treatment of Covid-19 patients.

Created 39 years ago, recent clinical studies reveal its key role as part of Cuba’s therapeutic treatment against the new coronavirus.

In statements to Cuban press, Dr. Eulogio Pimentel, president of the Center for Genetic Engineering and Biotechnology spoke about the results obtained thus far with the use of Interferon in the treatment of laboratory confirmed Covid-19 patients.

“Within four days of administering Interferon, the viral load in 50% of the patients who tested positive for the virus was no longer detectable. We’re also working on the combination of two different interferons, Interferon Alpha and Interferon Gamma, and the results have been much better than we actually expected. Again, within four days of applying the therapy, in practically 80% of patients, the real-time PCR tests turned out negative.”

The recombinant human Interferon Alpha-2b was the first in a long list of interferons developed and produced at the Havana-based Center for Genetic Engineering and Biotechnology since 1986.

On the initiative of Cuban Revolution leader Fidel Castro and with the decisive support of the Center’s founders, Cuba has been able to not just develop world-class science, but project its future economic development based on its many great accomplishments in scientific research.

Given its results, the Cuban Interferon is one of the most effective antivirals, compared with other such drugs produced worldwide.

Dr. Eduardo Pentón, a founding researcher at the Center for Genetic Engineering and Biotechnology explained that the medication has prevented a large number of Covid-19 patients from developing serious complications.

And he added that some Covid-19 patients who did develop serious complications have recovered thanks to the treatment with Interferon.

By the end of May, more than 80 countries had showed an interest in this Cuban medication to confront COVID-19, a reflection of confidence in the success of the therapy to fight the current pandemic, and in the great accomplishments of the Cuban biotechnological and bio-pharmaceutical industries.