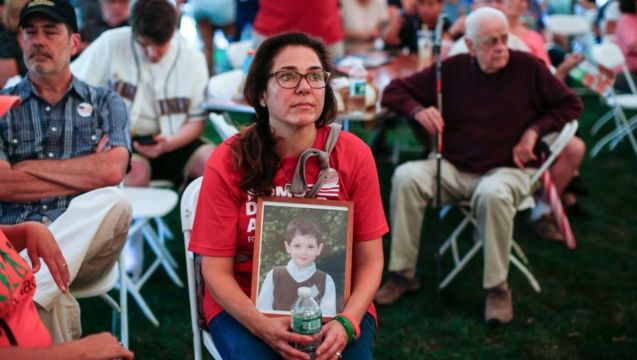 Francine Wheeler with a photograph of her son Ben. Getty Images

For the first time in history, a firm of the U.S. military industrial complex, Remington Arms, agreed to pay compensation to a group of families who lost some of their members in a shooting where an assault rifle of that brand was used.

This is undoubtedly a historic and encouraging verdict, because until now no manufacturer of these instruments, which circulate almost freely in the North American country, had accepted responsibility for the use their purchasers make of them.

The accusers argued that it is not possible for manufacturers to put military weapons in the hands of civilians for the sole purpose of increasing their multi-million dollar profits.

There are currently 390 million pistols, rifles, rifles, rifles and other equipment in circulation in the United States, not to mention the millions that move on the black market.

Obtaining a license to buy and possess weapons in that country is, on many occasions, easier than obtaining a driver's license to drive a car.

The results of this unbridled trade are plain to see, according to reports from the Gun Violence Archive, which keeps a very accurate daily compilation.

Last year, a total of 44,910 people died in the United States as a result of firearms injuries, 20,820 of them from homicides and the rest from suicides perpetrated with firearms.

Age does not save anyone, since 311 minors between zero and 11 years of age and 1,241 between 12 and 17 years of age lost their lives during this period.

If you do the math, you will discover that this means 124 unnecessary deaths every day, too high a price to pay in a country that calls itself "civilized" and even boasts of being the cradle of liberties.

This successful judicial process against Remington paves the way for other similar initiatives, among them the lawsuit filed by Mexico against 8 U.S. companies producing weapons, which were used in acts of violence against citizens of the Latin American country.

It remains to be seen how long the profits of manufacturers and sellers of these tools of death will be above the value of human life.