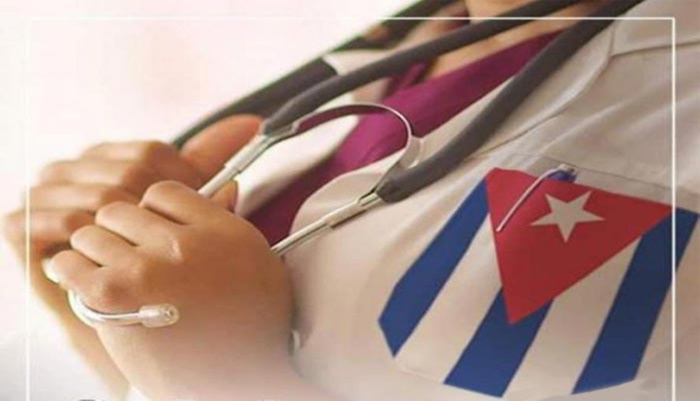 Cuba's medical collaboration has been consolidated and while the people and many governments are grateful for that altruistic service, right-wing forces raise campaigns aimed at tarnishing that tremendous service to humanity.

Cuba's medical collaboration has been consolidated and while the people and many governments are grateful for that altruistic service, right-wing forces raise campaigns aimed at tarnishing that tremendous service to humanity.

Fifty-nine years have passed since the arrival of the first detachment of doctors from Cuba to Algeria, considered the germ of an enduring program, despite material difficulties due to the U.S. blockade.

It has been precisely the United States, and essentially the administration of former President Donald Trump, the standard-bearer of harassment and the generation of slander against this professional and humanitarian service.

Outside the United States, conservative governments and political groups as well as private medical associations have also picked up the essence of the lies in order to weave the litany of the alleged slave labor used by the Caribbean nation.

Those who say so are telling heartbreaking lies, because Cuban doctors and nurses go to other countries after an agreement between the governments of Havana and the receiving country, on a voluntary basis.

Part of these missions developed in very poor nations, Cuba supports them free of charge, without the slanderers talking about it.

To sustain these plans without payment by the beneficiary country, the Caribbean archipelago needs to obtain financial income, extracted from the collaborations in more prosperous States.

The emoluments contributed by the latter also provide resources to support the free health service in the land of José Martí.

Therefore, it is slanderous to talk about Cuba's depleted labor force, something known in many latitudes, where almost 26,000 doctors, nurses and technicians are now working.

They often live in remote regions, with residents of scarce resources or where domestic health services do not reach.

With unique stories of solidarity from the Henry Reeve International Contingent of Doctors Specialized in Disaster Situations and Serious Epidemics, the Caribbean nation helped to face the effects of earthquakes, hurricanes and Ebola.

Fifty-nine years after the beginning of the Cuban health collaboration, it is sterile to overshadow or undermine so many lessons of professionalism, courage and altruism of the men and women in white coats.