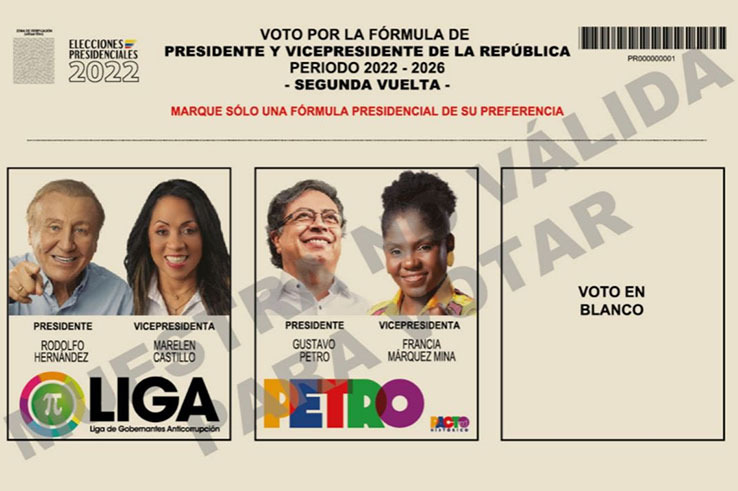 A definitive week begins in Colombia to designate the future president of the Republic between a progressive candidate, the senator and former mayor of Bogota, Gustavo Petro, and the conservative millionaire Rodolfo Hernandez, favorite of the local and regional right wing.

A definitive week begins in Colombia to designate the future president of the Republic between a progressive candidate, the senator and former mayor of Bogota, Gustavo Petro, and the conservative millionaire Rodolfo Hernandez, favorite of the local and regional right wing.

After the first round, held on May 29, the South American country was left between two opposing options, with the particularity that the traditional political sectors that governed during practically all the national life, are out of the game.

Perhaps the most remarkable was the debacle of the ruling party, Centro Democrático, founded and led by the extreme right-wing former president Álvaro Uribe, whom many consider the decisive figure behind President Iván Duque, who is about to leave office.

This was undoubtedly the clearest demonstration of the weariness of a society, punished by violence, both by the authorities and by irregular armed groups, at the service of drug trafficking mafias, organized crime and large landowners and businessmen.

Everything is ready, then, for some 39 million citizens, inside and outside Colombia, to go to the polls next Sunday, June 19.

Voting intention polls show a technical tie, except for the last one conducted by the Yanhaas firm, which gives Petro a difference of ten points over Hernandez.

It must be said that the latter rose notably after the first round, but it is not because he has conquered more sympathizers with his electoral discourse, quite imprecise, but because he naturally absorbed the right and extreme right sectors that were defeated on that occasion.

This gives a false image of popularity, especially in a country where abstention is around 50 percent of the citizenry. Many who were betting on other candidates may simply choose to stay at home next Sunday.

Even polling firms, such as Guarumo and EcoAnalítica Medición y Conceptos Económicos, which a week ago had Hernández between three and five points ahead of Petro, now show a one percent, or less, difference and the tendency is to reduce that gap.

On the other side, Gustavo Petro and his running mate, Francia Márquez, maintain their hard core of voters and expand it with a pragmatic and honest offer. They do not offer a radical revolution in Colombia, but to be the beginning of a process of changes that the majorities, little or not at all favored by previous governments, long for.