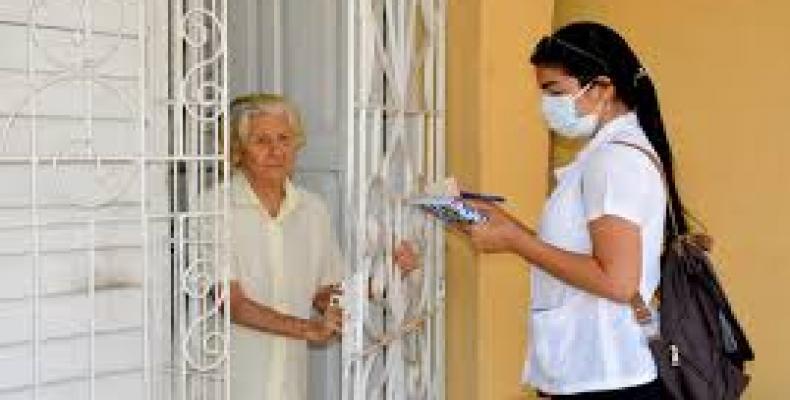 In today’s “This week in Cuba,” we review, first, the Cuban response to the Covid-19 pandemic; secondly, the effectiveness of Cuban medicine in the treatment of critical and serious cases of Covid-19; thirdly, Cuban treatment of aftereffects in some recovered Covid-19 patients; and fourthly, recognition in Cuba of the victory of the Soviet Union over Nazi Germany in 1945, 75 years ago.

(1) The Cuban response to the Covid-19 pandemic

Of the 1,941 confirmed cases in Cuba, approximately 90% contracted the infection through contact with a person previously identified as a confirmed case; 6% were imported cases, either an international tourist or a Cuban who had traveled internationally; and in 4% of the cases, the source of the infection has not yet been identified. In the evolution of Covid-19 in Cuba, initially the great majority of cases were imported; but as a result of the evolution of the transmission in Cuba, the great majority now involve contact with confirmed cases. Fifty percent of the confirmed cases have been asymptomatic at the time of their testing positive, which is an important factor in the maintenance of the health measures of social distancing and isolation. Of the confirmed cases, 85% have been discharged from the hospital; and 4.2% have died, which is a fatality rate significantly lower than the rate of nearly 7% in the world. The infection rate is 17.1 per 100,000 population, much lower than that of many countries. Reflecting the recent decline in the number of new cases, the infection rate in the last fifteen days has been 1.67 per 100,000 population.

At the daily press conference on COVID-19 of May 20, Dr. Francisco Duran, Director of Epidemiology of the Ministry of Public Health, was asked by an international press agency to identify a unique aspect of the Cuban response to the pandemic. Dr. Duran’s sympathetic manner and thorough and clear responses to questions on a daily basis have converted him into a beloved figure in Cuba. On this occasion, he responded that what is unique in the Cuban response has been the integrated combination of measures, including: first, the establishment of isolation centers, and the placing in isolation of all confirmed cases, contacts with confirmed cases, and persons with suspicious respiratory symptoms; secondly, the search for the contacts of all confirmed cases, so that they can be isolated and tested; thirdly, door-to-door inquiries, looking for persons with symptoms and persons who may have had contact with confirmed cases, conducted by medical university students with the support of neighborhood organizations; fourthly, testing of a random sample of the population, initiated the week before last, which is designed to determine the level of immunity of the population, and which thus far also has led to the confirmation and isolation of a few cases; fifthly, the use of preventive medicines for the population at risk, such as older persons; and finally, medical treatment of sick persons in accordance with procedures developed by a team of doctors and scientific researchers.

In the press conference on the following day, Dr. Duran spoke of Cuba’s identification of local transmission events, where confirmed cases are found concentrated in a particular locality or institution. The locality or institution is quarantined. Dr. Duran noted that no additional treatment is applied; it is a question of greater vigilance to ensure compliance with the health measures. The local transmission cases are closed where there has not been a new confirmed case for fifteen days. As of May 22, forty-four local transmission events have been identified; thirty-one have been closed, and fourteen remain active.

During the May 22 daily evening news television/radio program La Mesa Redonda, Dr. José Ángel Portal Miranda, Minister of Public Health, stated that the comprehensive combination of measures, which has been successful thus far in containing the virus, has been possible to develop and implement because of the priority that Cuba has given to public health for years.

The Center of Biotechnology and Genetic Engineering has developed an immune modulating peptide (a protein fragment of low molecular weight). CIGB-258, as the molecule has been named, is effective in containing an exaggerated reaction of the immune system to COVID-19 infection. The exaggerated reaction causes acute respiratory stress, fatal in most cases. Dr. Gillian Martínez Donato, director of the CIGB-258 project, informed Granma newspaper that 19 patients in critical condition and 12 in serious condition have received the CIGB-258 therapy. She noted that 73% of the critical patients and 92% of the serious patients have survived. She stated that these results are very encouraging, because international reports indicate that the survival rate among COVID-19 patients in critical condition does not surpass 30%.

Another procedure in the treatment of critical and serious cases was mentioned by Dr. Duran, in response to a question, at the May 21 Ministry of Public Health press conference. He referred to blood extractions from sixteen recovered patients, whose blood now has antibodies, generated by the immune system in reaction to the presence of the COVID-19 virus. The blood has been used to create a hyperimmune plasma, given to patients in grave and critical condition, with good results. On the May 22 program of La Mesa Redonda, Dr. Consuelo Macías Abraham, Director Institute of Hematology and Immunology of the Ministry of Public Health, noted this is a common technique in the world, which is used less frequently in Cuba, because Cuba has a developed biotechnological industry that is able to give an important response to the needs of the population. She also indicated that research is underway to produce the plasma in a form that could be administered as a preventive medicine.

(3) Cuban treatment of aftereffects in some cured Covid-19 patients

An article in the May 22 issue of Granma reports that Cuba, taking into account reports emitted by prestigious international scientific research centers, has been giving attention to following the medical evolution of COVID-19 patients who have been discharged from the hospital, with the intention of detecting in time any damage done to the lungs and to prevent its progression toward irreversible pulmonary insufficiency.

An example is the new clinical trial initiated recently by the Institute of Hematology and Immunology, under the direction of Dr. Consuelo Macías. She notes that some recovered COVID-19 patients, discharged from the hospital, have been found with pulmonary lesions. Patients that during their hospitalization were classified as in serious or critical condition, with acute respiratory symptoms, have permanent inflammatory lesions as an aftereffect, detected by means of high resolution Computerized Axial Tomography (CAT). She reports that the clinical trial involves the employment of adult mother cells that have the capacity to regenerate lesions and diminish inflammations. An injection produced by the Center for Molecular Immunology mobilizes the mother cells from the bone marrow to the blood. Then the blood of the patient is extracted, and the mononuclear cells are separated. The mother cell is found in this cellular pool; the cells are infused intravenously

An article by Enrique Milanés León in the May 17 issue of Juventud Rebelde, entitled “Fascism, imperialism, and the pencil of the lie,” takes issue with a Pentagon tweet that intends, in his view, to change established facts. He refers to the May 9 Pentagon tweet that celebrates May 8, 1945, as the day of the victory of the United States and the United Kingdom over the Nazis. He refers to the strong protest of Russian Foreign Minister Maria Zajárova, who maintains that it was the Soviet “Red Army that broke the crest of the fascist military machine,” because the allies did not open the second front in Normandy until 1944, when it was clear that the Third Reich was losing the war. Milanés points out that 250,000 U.S. soldiers lost their lives in the European theater, far less than the 7 million German soldiers and 8.6 million Soviet soldiers that lost their lives on the eastern Soviet-German front. Nearly 75% of the German fatal military casualties during the entire war lost their lives in the eastern front. Milanés also cites U.S. President Franklin Delano Roosevelt, who described the battle of Stalingrad of February 2, 1943 as a glorious Soviet victory that was the turning point in the allied war against the Nazi aggression.

In his documentary series, the Untold History of the United States, Oliver Stone also points out that the United States and the United Kingdom delayed the launching of second front, while the Soviet Union took on and defeated the German military machine in the Eastern front, with great cost to both sides.