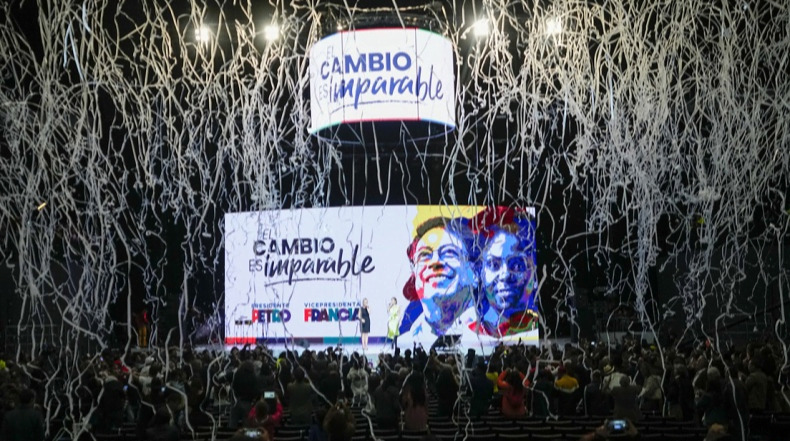 Colombia, that country of which Gabriel García Márquez said that it has one foot in the Caribbean and the other in the Andes, crossed the threshold of a new world this Sunday when it elected the first progressive government in its history, headed by Gustavo Petro and Francia Márquez.

Colombia, that country of which Gabriel García Márquez said that it has one foot in the Caribbean and the other in the Andes, crossed the threshold of a new world this Sunday when it elected the first progressive government in its history, headed by Gustavo Petro and Francia Márquez.

The dream for which Jorge Eliécer Gaitán, Jaime Pardo Leal, Luis Carlos Galán, Bernardo Jaramillo, Carlos Pizarro and thousands, tens, hundreds of thousands of others who dreamed that one day a day like this would happen in the South American nation, finally came true.

According to official data, Petro and his running mate reached 50.5 percent of the vote, driven by the Historic Pact, a coalition that brought together progressive, left-wing, human rights and environmental forces.

Millionaire Rodolfo Hernandez, behind whom the traditional political parties were grouped, was left with 47.3 points and at the end of Sunday afternoon he had to acknowledge his defeat.

As soon as the result was known Petro said through social networks that "Today is a day of celebration for the people, let them celebrate the first popular victory".

Numerous videos showed in fact how the squares in the cities, big and small, were filling with a crowd of Colombians happy that finally peace and life can be within reach.

As the now Vice President-elect Francia Márquez had already said days before, and I repeat it with great pleasure, that in those elections were at stake the dignity, human rights of the middle and lower strata of society, institutionality and democracy, that is to say, life.

Of course, enthusiasm does not allow us to forget all the difficulties that will come after, and perhaps before, August 7 when Iván Duque hands over power to the new authorities.

It is impossible that in the time of the next mandate all the problems will be solved and the wounds opened for decades will be healed, but they will be the first steps towards the future, towards national reconciliation, that which is not born of signed papers but of concrete actions.

To those who intend to hinder Gustavo Petro's program, it is convenient to remind them of the "Prayer for Peace", formulated by Gaitán shortly before being assassinated and which was addressed to the repressive government of Mariano Ospina:

"We, Mr. President, are not cowards: we are descendants of the braves who annihilated tyrannies on this sacred floor. But we are capable, Mr. President, of sacrificing our lives to save the tranquility and peace and liberty of Colombia...."