Title II of Helms-Burton: the carrot and stick policy 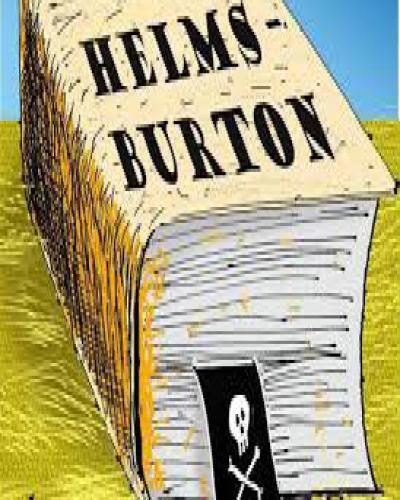 While the sanctions stipulated in Title I of the Helms-Burton are directed against the Cuban Revolution, in Title II the guidelines of U.S. policy towards their hoped-for future Cuban governments are sketched out. The title’s name ”Assistance to a Free and Independent Cuba” says it all. Many analysts say it is like putting the carrot of assistance from the U.S. in contrast to the stick of the present day sanctions.

But, the Helms-Burton law is not even that, and as analysts agree the expectations with it are even worse.

Title II establishes that the U.S. President may take whatever steps towards lifting the blockade only after he has

fully demonstrated to Congress that in Cuba a so-called ”transition government” is in power.

A long list of totally absurd, unacceptable conditions follows, containing what Washington defines as a ”transition government” in Cuba –again dictating to the Cuban people what are unequivocally the prerogative of Cubans as a sovereign, independent nation.

Title II of the Helms-Burton lays down the conditions demanded by the United States for, as they put it, ‘re-engagement with Cuba.’

This section of the law explicitly prohibits Washington from engaging with any Cuban government unless all properties nationalized after the 1959 Revolution have been returned or full compensation has been made to the original owners.

Title II, which has been rightly called a second Platt Amendment, openly bets on the overthrow of the Cuban Revolution and the establishment of a regime that will serve Washington's interests.

The law aims to dictate the cornerstones of Cuban politics. It thus in fact enters into the heritage of the notorious Platt Amendment, anchored into the Cuban constitution in 1901, which ceded to the U.S. the right of intervention whenever they deem U.S. -not Cuban- interests were at stake.

Under Helms-Burton, just as with the 1901 Platt Amendment, Cuba would again fall under the tutelage of the U.S., specifically the U.S. Congress.

As rightly stated in the statement issued by the Cuban Foreign Ministry MINREX on March 4th last, ‘this is an aspiration that can only be conceived by the minds of those who identify Cuba as a colonial possession.’

This law relies on two fundamental lies: the notion that nationalizations carried out soon after the triumph of the Revolution were illegitimate or inappropriate, and that Cuba is a threat to the U.S. national security.

Cuban nationalizations were carried out in accordance with the law, strictly abiding by the Constitution and in accordance with international law. All nationalizations included processes of fair and appropriate compensation, something that the U.S. government refused to consider. Cuba reached and honored global compensation agreements with other nations which are today investing in Cuba, such as Spain, Switzerland, Canada, the United Kingdom, Germany and France.