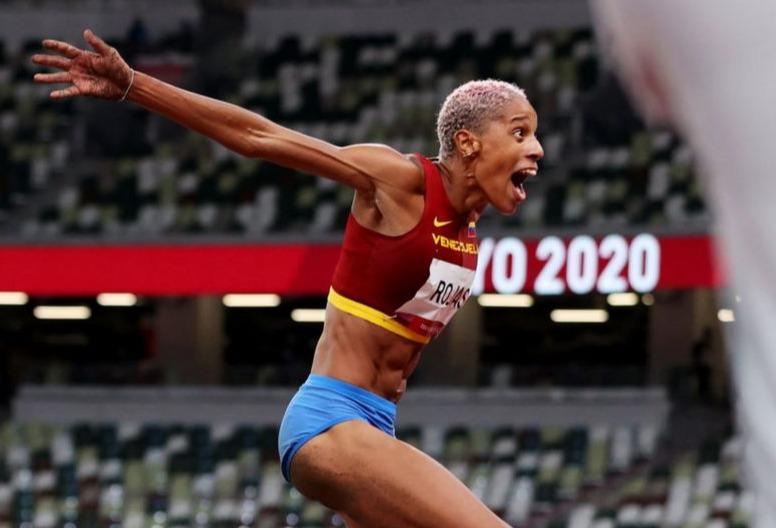 Tokyo, August 1 (RHC)-- Venezuelan athlete Yulimar Rojas won the gold medal in triple jump and set a world record by jumping 15.67 meters in her fifth and final attempt of the competition, taking place at the New National Stadium in the Japanese capital, as part of the Tokyo 2020 Olympic Games.

Portugal's Patricia Mamona was second with 15.01 m, and Spain's Ana Peleteiro was third with 14.88 m, a national record.

After Rojas' triumph, Venezuela went wild to celebrate the victory, while messages of congratulations for the record holder rained down on social networks, including one from Venezuelan President Nicolás Maduro.

"Tremendous victory for Yulimar Rojas! Gold Medal, World and Olympic Record for you warrior, you shine with your own light.  You are a true reflection of the fighting spirit and greatness of the Venezuelan people.  You are at the pinnacle of sports.  You are a great athlete!  Congratulations Champion!" the Venezuelan president wrote.

Mervin Maldonado, Minister of People's Power for Youth and Sports, joined the celebration of the Venezuelan people, saying that this has been "the best performance of Venezuela in its entire history in the Olympic Games."

On the other hand, the Minister of People's Power for Internal Relations, Justice and Peace, Carmen Melendez, and Foreign Minister Jorge Arreaza, described Rojas' triumph as historic.

The foreign minister wrote on his Twitter account: "We never doubted it, but you went too far! #Yulimar 1st of #Venezuela.  Immense.  Historic day."

Venezuela's executive vice president, Delcy Rodríguez, wrote on Twitter: "Great, champion!  Our Yulimar Rojas won the first gold medal for Venezuela in #Tokyo2020.  Thank you for filling our homeland with joy and pride.  You are a brave and courageous example of Venezuelan women. Keep shining before the world!