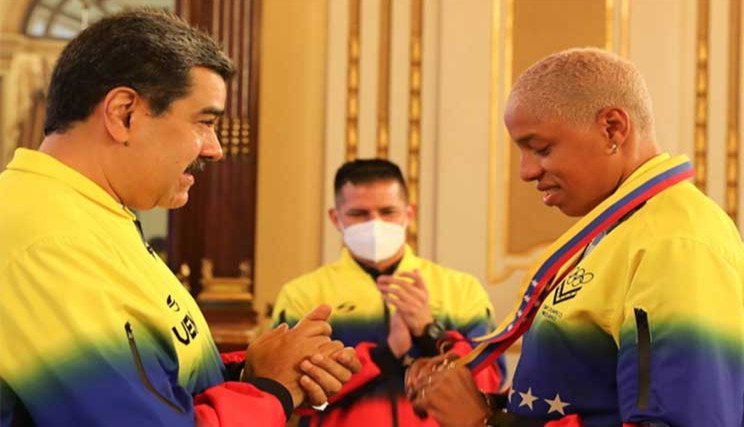 Caracas, September 17 (RHC/PL)-- Venezuelan President Nicolas Maduro conferred the Second Class of the Order of the Liberators of America to athlete Yulimar Rojas, Olympic champion in Tokyo 2020 in the triple jump.

In a ceremony held on Thursday at the Miraflores Palace, the president granted Yulimar Rojas a recognition reserved to outstanding personalities for their merits and contributions to the service of the country and humanity.

In the Japanese capital, the jumper won Venezuela's third gold medal in the history of the Olympics, besides becoming the first woman from the South American nation to climb to the top of the podium in an event under the five rings, with a world record of 15.67 meters.

"You are received with much love by a whole country, with true love, with recognition," said the Bolivarian leader during the meeting with the Olympic gold medalist.

President Maduro ratified the commitment to guarantee all the conditions for the preparation of Venezuelan athletes for the Paris 2024 Games, with the aspiration of improving the results of the last edition of the great sporting event.

The Venezuelan delegation starred in Tokyo 2020 the best performance of the country in these competitions, by adding three silver medals through the cyclist Daniel Dhers, in the BMX freestyle modality, and the weightlifters Julio Mayora and Keydomar Vallenilla.

Rojas expressed her happiness and satisfaction for being back in her country, after an intense season that also included the Diamond League triple jump title, with a record of 15.48 meters in the final in Zurich, Switzerland, a record for the event and the third best mark of all time.