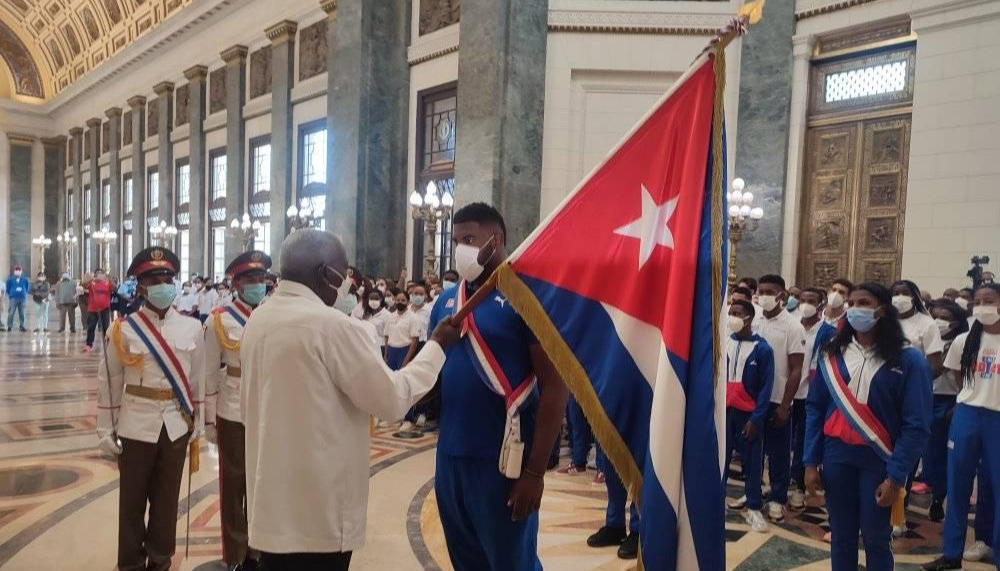 Havana, November 13 (RHC)-- The Cuban delegation of 214 athletes in 26 disciplines to the First Junior Pan American Games Cali-Valle 2021 was presented with the national flag on Saturday at the Parliament headquarters in Havana.

Esteban Lazo, president of the Cuban Parliament and member of the Political Bureau of the Communist Party of Cuba, handed over the national ensign during the ceremony held in the Hall of the Lost Steps of the National Capitol to 19-year-old world junior shot put champion Juan Carley Vázquez.

The new talent of Cuban athletics, who was escorted by wrestler Milaymis de la Caridad Marín and boxer Ronny Álvarez, was honored to carry the Cuban flag and said that, although he is adapting to the new implement (heavier), he will go out in search of a good result in the competition.

Lazo wished success to all athletes and urged them to compete with decorum and dignity.

At the end of the ceremony, the head of parliament talked for about 20 minutes with the athletes, he was interested in the progress of the preparation for Cali, evoked the work of the Revolution led by Fidel in sport and reminded them that to defend the Revolution they must know details of its history.

Discbola Melany Matheus, reading the athletic oath, said that the delegation will travel to Cali with the commitment to defend the achievements of Cuban sport and will give the maximum to deserve the recognition of the Cuban people.

In her opening remarks, the first secretary of the Young Communist League, Aylín Alvarez, exhorted the athletes to give their best, and even if they do not win a medal, to compete with honor in representation of their country.

The event was also attended by Rogelio Polanco, member of the Secretariat of the Central Committee of the Party and Head of the Ideological Department, Jorge Luis Perdomo, Vice Prime Minister of the Republic of Cuba, Josefina Vidal, Vice Minister of the Ministry of Foreign Affairs, and His Excellency Juan Manuel Corzo Román, Ambassador Extraordinary and Plenipotentiary of Colombia in Cuba.

The Junior Pan American Games will take place in several Colombian cities from November 25 to December 5 and will be attended by more than 3,500 athletes from 41 countries.