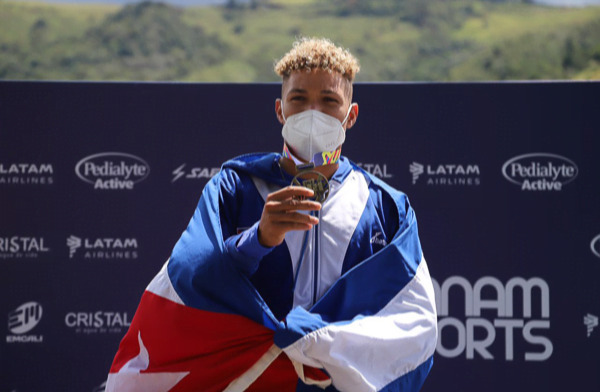 Havana, November 26 (RHC)-- The waters of Lake Calima brought gold and silver for Cuba on Friday thanks to the performances of canoeist José Ramón Pelier and kayaker Reinier Carrera at the First Pan American Junior Games.

"I felt good in the 1,000 meters, from the beginning I went out in front. I said to myself what is this, but I stayed strong, long, focused. At the end I let go a little bit, the air was in front and with waves, the boat was taking on water and I tried not to "kill myself" in case someone was being "funny" and I could answer him (laughs)," he said as soon as he got off the boat.

"The preparation was very good together with my teacher, who told me we are going to win and leave it in the history of the competition," said smiling the world youth champion of the C1-1000 in Pitesti 2019 and with several awards in senior world cups.

Pelier dedicated his triumph to his family and also sent a special message on the occasion of the fifth anniversary of the physical departure of Commander in Chief Fidel Castro Ruz on November 25.

The duo of Katherin Nuevo and Érika Bárbara Cerza finished fourth in the C2-500 meters with a time of 2:06.49 minutes. The podium was topped by Chile's Barbara Darlen Jara and Paula Beatriz Gomez (2:02.77).

"A pretty tough competition, not so much because of the rivals as because of the teammate who is now with me in the team boat. It is our first international competition together, we have only been training together for a week due to Yarisleydi Cirilo's injury. We are not used to it, but she did her best, made an effort and did her best. I'm happy about that," said Nuevo, world runner-up this season.

"Tomorrow (Saturday) I'll get even in the C1-200 meters and I'll try to win to qualify for the Pan American Games in Santiago 2023", she finally declared.

Madelén Heredia passed fifth the sentence line of the K1-500 meters final, with a time of 2:09.35 minutes.

The queen of that distance was Mexico's Isabel Aburto Romero, with a time of 1:59.92 minutes.