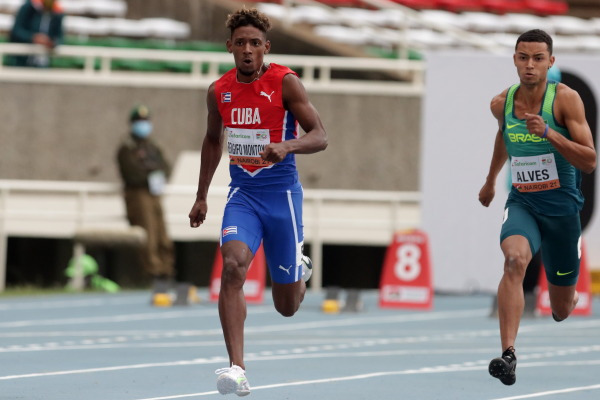 Havana, May 21 (JIT) - Shainer Reginfo's gold and Maykel Massó's silver medals focused Cuba's attention at the start of the Ibero-American Athletics Championships of Alicante 2022, which already left other good performances and confirmations of expected ranks.

The bronze medalist in the hectometer in the last universal competition for juniors surprised with the pleasant news of 10.15 seconds in the queen event of this sport, thus surpassing Brazil's Felipe Bardi (10.26) and Argentina's Franco Florio (10.31).

"All of us in the delegation are very happy with Reginfo's gold medal. It is a resurgence of this discipline, he did very well in the World Youth Championships and now in his first foray into Europe among adults he is doing well again," Daniel Osorio, head coach of athletics on the island and head of the group in this event, told JIT.

Maykel, Olympic third in Tokyo 2020 in the long jump, achieved 8.03 meters, a record that was only surpassed by host Eugenio Cáceres with 8.05 meters in his only valid attempt among the six to be executed.

For Massó it was a day of stability. In addition to the silver jump, he achieved another one of 8.02 meters and in the remaining ones he was above 7.33 meters without failures. At 23 years of age, the Caribbean athlete is a main man in the current elite and his eyes are fixed on the world championship next July, where he aspires to be a medalist.

"I am satisfied with Massó's work because the goal was the eight meters and he scored them twice. Even the ones that by measurement were below were also eight meters if you look at it from where he took off. I liked his performance," said Osorio about his student, who is at the end of the strength stage and will find himself with better marks as the season progresses.

Cuba also depended in the long jump on the less experienced Maikel Vidal, who with 7.89 meters placed sixth in the ranking. The podium was completed with the bronze medal of Spain's Héctor Santos.

The other final of the day for the Island was in the javelin among women and Yiselena Ballar finished fourth with 56.14 meters. The medals were won by Ecuador's Juleysi Anahí Angulo, winner of the gold medal with a national record of 60.91 meters; the silver went to Colombia's Flor Denis Ruiz (60.52) and the bronze to Brazil's Jucilen Sales (57.86).

In the semifinals were Roxana Gómez and Eliani Casi in the 400 meters, Zurian Hechavarría in the 400m hurdles and Daily Cooper in the 800m.

The former, an Olympic finalist, clocked 51.68 seconds in a photo finish heat and secured her place in the final. Eliani -who lives in Spain and for the first time represents Cuba- did not advance due to her discreet 54.37 seconds.

In that event, the attraction was provided by the Dominican Marileidy Paulino, silver medalist in Tokyo 2020, owner of the best time in the semifinals with 50.82 seconds. By the way, in the final she could break the record of the competition held by the Mexican Ana Gabriela Guevara with 50.65 since July 1998.

Zurian clocked a year's best of 56.63 seconds and will be in a final that will be the second event of Saturday afternoon's program. Cooper was disqualified in the double lap of the track at the Camilo Cano Olympic Stadium.

This Saturday, in addition to the medal discussions for Roxana and Zurian, the Cuban delegation will depend on the triple jumper Lazaro Martinez, world indoor champion last March.

Brazil, which now competes with the largest delegation, is the historical winner of these competitions. It has accumulated 194 gold medals. Cuba is next with 176 titles.