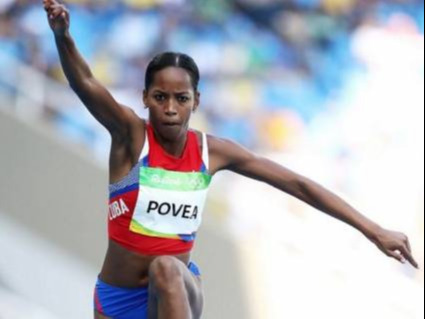 The three Cuban athletes will try to be among the 12 finalists in the triple jump, an event that requires a qualifying mark of 14.40 meters (m).

In the case of Perez, champion at the I Pan American Junior Games in Cali, Colombia, in 2021, and winner of the Ibero-American tournament held last May in Alicante, Spain, she will be in group A, while her two teammates will be in group B.

A total of 28 triple jumpers competed in this modality, so 14 will compete in each of the two groups.

In this season, the best record of the representatives of the island is held by the young Leyanis, with 14.58 m; while Povea, winner of the silver medal in the Alicante competition, has 14.45 m, although her personal best is 14.93 m.

Of the three, the one with the most discreet results is Velazco with 14.22 m this year and 14.34 m for life, according to the official website of World Athletics.

In group B of the qualifying stage is Venezuela's Yulimar Rojas, Olympic and world champion and world record holder with 15.74 m, who will undoubtedly be the main candidate to win the women's triple jump title at the Hayward Field stadium.

Cuba's Maikel Massó, who on Friday qualified for the long jump final with 7.93m, will also compete again today.

Massó, a bronze medalist at the Tokyo 2020 Olympic Games, won the last ticket to the medal discussion in that event, in which he has a seasonal best of 8.14 m in May and a lifetime best of 8.39 m last year.

On the first day of this universal competition, Latin America had two great joys through the Peruvian Kimberly García and the Dominican Republic's 4x400 m mixed quartet.

García won the title in the 20 km race with a national record of one hour, 26 minutes and 58 seconds; while the Dominican relay, with a superb performance by Marileidy Paulino, won the gold medal with a time of three minutes, nine seconds and 82 hundredths of a second.