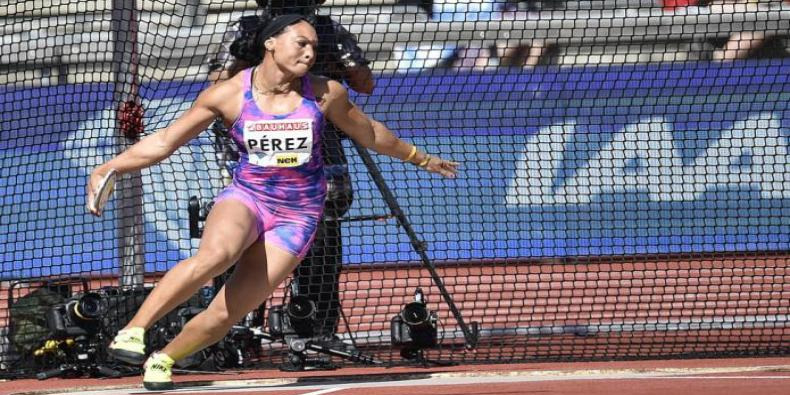 Five Cubans are competing this Monday in the World Athletics Championships in Eugene, among them the champion exponent of the discus, Yaime Perez, in the qualifying round.

Havana, July 18 (RHC) - Five Cubans are competing this Monday in the World Athletics Championships in Eugene, among them discus champion Yaime Perez, in the qualifying round.

Leyanis Pérez (triple jump) and Luis Enrique Zayas (high jump) will be in the finals in the medal competition, while Shainer Reginfo (200) and Silinda Morales (discus) will be in the qualifying rounds.

Although she has not had a brilliant season or many top-level competitions, Yaimé Pérez should have no difficulty in qualifying for the finals, which should also be reached by Olympic champions Valery Allman and Sandra Perkovic.

The Doha-2019 champion and Olympic bronze medalist at Tokyo-2020 boasts as her best result of the year a shot of 64.45m, achieved in Montreuil (France), which places her in eleventh place in the world ranking.

Her most recent competition was just a month ago, when she won the Barrientos Memorial in Havana, with a 63.30m shot.

As for the 20-year-old Leyanis Perez and Luis Enrique Zayas, they will be in the finals in search of a podium finish.

Leyanis, fourth in the world list with 14.58m, did not have a great qualifying phase but managed to enter among the 12 finalists with 14.30m, a mark she must improve to aspire to a good place in the final.

The same happens with Zayas, fifth in the last world championships in Doha, but today far from his best records and without international competitions this year.

However, in qualifying, the Pan American champion of Lima-2019 was very motivated and in good shape, surpassing the 2.28m required to qualify for the fight for the medals.

Sunday's great attraction was Jamaica's hat-trick in the women's 100 meters, where the historic Shelly Ann Frasser won her fifth world crown in the hectometer at the age of 35.

The spectacular sprinter clocked 10.67 seconds in the final, a world championship record, and was escorted by her compatriots Sherika Jackson and Elaine Thompson.