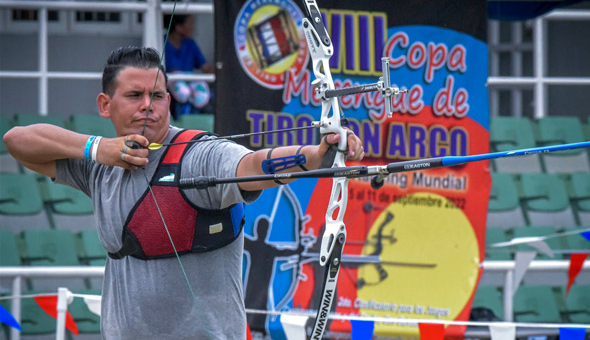 Havana, November 23 (JIT) - Three national records marked a good day for Cuba in the Pan American and Parapan American Archery Championship of Santiago de Chile 2022, which opened its curtains with the celebration of the double round of 70 meters in the conventional recurve modality.

Hugo Franco stood out with a record of 677 points after the barrage of 72 arrows and erased from the books the previous mark of 666 held by the already retired Juan Carlos Stevens since 2016.

The 30-year-old from Pinar del Río had 658 points as a personal best, but this Tuesday at the military school field in the Chilean capital he achieved two excellent runs (36 arrows in each) of 333 and 344 units, to reach the final sum.

"He had been stable for several seasons, hovering around 658 points. Today he did very well," assessed from the headquarters coach Vladimir Quintas, happy with the performance of almost all the Cubans in action.

"Hugo is assuming the responsibility of team leader and that was what we needed", added the experienced trainer, who also has under his orders the youngsters Javier Vega and Juan José Santiesteban.

With the aforementioned score, Hugo finished third in the general ranking, only ahead of Mexico's Matías Grande (682 points) and Colombia's Jorge Enríquez (679). Vega completed 628 units and was in 31st position, while Santiesteban placed 41st among 66 contestants, with an accumulated 617.

As a team, the Cuban trio totaled 1,922 points and will be the rival this Wednesday of the Dominican Republic in the round of matches that will define the qualifiers to the Pan American Games of Santiago 2023.

Among women, another Cuban record of the day was set after Elizabeth Rodriguez scored 327 points in the first round of 36 arrows at 70 meters. The previous record was held by Maydenia Sarduy: 326.

The Santiago-born Elizabeth completed her runs with a second round of 314 points to total 641, which earned her the second place in the general classification, behind the American Casey Kaufhold (662).

"It didn't help the wind in the afternoon. It was very unstable and that affected," Quintas acknowledged before confirming that the girls' matches will also be held on Wednesday afternoon. Maydenia accumulated a total of 597 units and placed 19th, one ahead of junior Yailín Paredes (589).

As a team, the girls totaled 1,827 units and will face the representatives of the U.S. Virgin Islands in the round of 16.

The third national score was improved in the double 70-meter lap for mixed teams, in which the totals of the best man and the best woman of each country are added together. In the case of Cuba, Hugo and Elizabeth, whose combined totals reached 1,318 points.

This Wednesday, in addition to the team eliminations, the archers with disabilities will be in action. Cuba will be represented by Leydis Posada and Alejandro Hernández.

Their goal is to qualify for the Parapan American Games in Santiago 2023. To do so, they will have to be among the first 11 in the individual round.