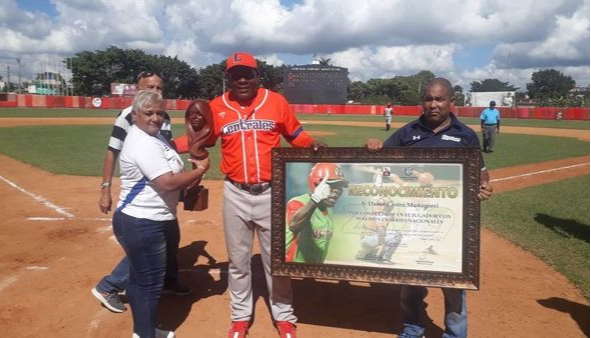 Havana, November 24 (ACN) --The arrival of Danel Castro to the figure of 2,379 hits -- a new record for Cuban baseball -- and the double triumph of the runner-up Portuarios, colored the actions of the 1st Elite League that this Thursday will drop the curtains of its tenth particular sub-series.

With his 46 years, Danel, who accumulates 28 national series and now included in the ranks of the Centrales team, got the longed-for goal at the Nelson Fernandez stadium, in Mayabeque, in the first game of a doubleheader against Portuarios.

That hit of new national record was solved by the idol of Manatí thanks to two home runs -one inside the field- in the first loss of his team (4-5) against Portuarios, to leave behind the previous record of the capital Enrique Díaz. Danel drove in three of his team's four runs.

In this duel, reliever Juan Xavier Peñalver, who only got the last out of the game, won the game. Denis Laza batted 3-2 with a home run and a tow, while Yasniel González hit the single that left Centrales on the field at the end of the seventh inning.

In the second inning, the Portuarios won 9-2, as they went to bat and did not stop until they scored a whopping 14 hits, including a home run by right fielder Alexander Pozo, who went 3-2 with three runs to the plate. Winning was Yadián Martínez, who pitched 6.0 innings with four singles and three strikeouts.

Meanwhile, the leader Agricultores won the third successive game against Cafetaleros, away at the Calixto García park in Holguín, today with a 3-1 score and the third success for left-hander Leandro Martínez, who in 6.0 innings gave up seven hits and three strikeouts.

Reliever Alberto Pablo Civil saved his sixth game, the leader in this important department, by throwing two thirds without a hit. Both teams left 11 runners on the pads.

Finally, Ganaderos overcame Tabacaleros 3-2 at the 26 de Julio stadium in Artemio, with the third win without defeat for the right-hander Yander Guevara, despite allowing eight hits and giving away two tickets in six innings.

Yanieski Duardo got the save and Yordanis Samón, who hit 4-3, with a triple and an RBI, was the highlight of the game.