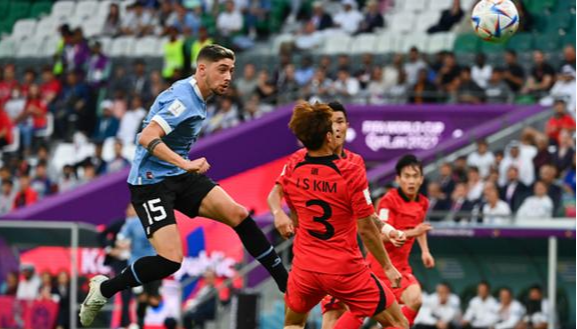 Havana, November 24 (RHC) - Uruguay and South Korea drew in a match without much history (0-0). With virtually no chances and a very flat game, the veteran South American team failed to find its best version against an Asian team that was very orderly on the pitch, but without much bite in attack. A draw was enough for both teams to start the World Cup on a positive note, as they look to improve on their results against Ghana and Brazil.

The match had raised high expectations, where one of the great 'veterans' was facing a team that started with the status of 'underdogs', with Heung-Min Son (Tottenham) and Kim Min-jae (Napoli) as the main attacking attractions. However, the match was a huge disappointment: not only was it neither eye-catching nor attractive, but the chances were conspicuous by their absence and the match fizzled out as the minutes went by.

In the first 45 minutes, parity was the keynote of the match. Neither Uruguay nor South Korea were able to make the difference in a first half in which neither team had enough merit to take the lead. And both teams had a couple of clear chances, although it is true that it was more due to the demerit of both defenses than to the attacking skills of two teams that did not show too much gunpowder.

During the early stages, the approach was clear: Uruguay constantly sent long balls in the direction of Luis Suarez and Darwin Nunez, while Korea tried to overcome lines by playing and playing, but without much depth. The match was like a game of chess, with each of the national teams looking to hurt their opponents, but without neglecting their rearguard, a fairly common trend in the first match of each group.

However, the first to send out a warning was Korea. It happened in the 35th minute, when a good run down the flank by Kim Mon ended with a ball into the heart of the box, where Hwang Jo missed Rochet's goal and sent the ball over the crossbar. Just a few minutes later, in the 43rd minute, it was Diego Godin who had the chance for Uruguay, when he sent a corner kick by Fede Valverde against the post. Little else in a first half with little history.

A second half to forget
Despite the fact that the first few minutes had left much to be desired, the feeling that the best chances had come in the final stretch of the match suggested that the second half would be the best... but nothing could have been further from the truth. The dynamic was the same as at the beginning of the match, where only long-range attempts without much precision were seen. A shot that missed the target by Darwin Núñez in the 80th minute was the most dangerous thing... until the last minute.

It was in the ninetieth minute when both teams were able to level the score. The clearest chance came from Fede Valverde, who smashed a 30-yard drive into the top corner of the Korean net, but Son responded immediately with a missile from the edge of the area that went just wide of Rochet's post. The match will not be remembered in World Cup history and the best news for both teams is the draw that keeps them alive for the upcoming Group H matches.