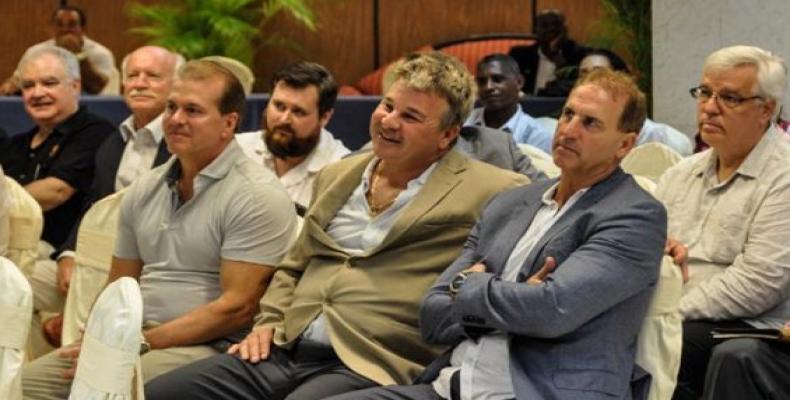 A group of business people from the US State of Ohio were in Cuba looking for opportunities to foster bilateral trade in the event that the US economic, commercial and financial blockade against Cuba is lifted.

The trade mission, headed by Congressman Tim Ryan, met with Cuban authorities on the potential of the two sides to exchange in key economic sectors, such as tourism, construction, agri-business and health.

The director of the North American Division at the Cuban Foreign Trade and Investment Ministry, Maria de la Luz B'Hamel, said that there are many opportunities to develop bilateral commerce if the US blockade is lifted.

Cuban-American lawyer Luis Alcalde expressed the interest of the US businessmen sector in learning from Cuba to boost bilateral trade in the benefits of both peoples, and stressed their wish that the US Congress should finally lift the US anti-Cuba policy, which only prevents that both countries get the direct benefits of possible joint business initiatives.

The US trade mission also visited the Special Development Zone at the western Mariel harbor and met with representatives of the US embassy in Havana. The Ohio business people group finally held bilateral meetings with Cuban directives from the areas of tourism, logistics, transportation, health and other sectors.

Services, operations and logistics in the tourism sector in Cuba have suffered adverse effects due to the U.S. blockade imposed on the island for more than 5 decades which according to the report presented by Cuba to the UN General Assembly, the amount of its damages in that branch totaled $1.506 billion USD, just from April 2014 to the same month in 2015.

The recent agreements between Cuba and the States create favorable conditions for a significant increase of visits by Americans to the island, but the blockade still maintains the prohibition of tourist travel to Cuba.

If the blockade regulations did not exist, for instance, Cuba would be favored by 140 cruise ships that operate weekly in the Caribbean area, and whose main market is the United States.

Moreover, due to this policy, Cuban hotels may only use the Amadeus booking system, one of the 4 large Global Distribution Systems having international scope as the other 3 are from the United States.

Meanwhile, other providers of those services hesitate to do business with Cuban entities fearing fines and of having their sales in the United States threatened.

That industry plays a fundamental role in the country's development, and during the mentioned period, losses to this branch of the economy are estimated at $73,416,529 USD.

The main causes for this effect are due to the geographical relocation of markets, immobilization of resources in inventories, variations in the exchange rate for foreign commerce and financial operations because of the impossibility to use U.S. Dollar.

With the political environment in Cuba improving rapidly as it reestablishes political relations with the US, business in Cuba is booming. A delegation of Cuba’s Minister of External Trade and Foreign Investment Rodrigo Malmierca Diaz said to Kuwaiti investors to invest in Cuba.

Diaz was accompanied by Cuba's Director of Foreign Investment Opportunities Deborah Rivas and Cuba's Ambassador to Kuwait Andres Gonzalez Garrido as they visited the Kuwait Chamber of Commerce and Industry (KCCI) yesterday.

The group was welcomed by KCCI Chairman Ali-Mohammed Thunayan Al-Ghanem and a number of KCCI members. “Our political ties are excellent, but zero in terms of economic relations. So we want to hear from you how we can improve this,” Ghanem said as he welcomed the delegation at the KCCI headquarters in Kuwait City.

Diaz said he is keen on developing and improving economic ties with Kuwait. “We have excellent relations politically, and we are thankful for this, but we want to see the same level in terms of the economy,” he said in his opening remarks. “We are in the process of change in Cuba, a process we initiated with our own population. We have the consensus of the majority of people when we approved the so-called guidelines for the economic and social development of Cuba,” he pointed out.

“After discussions with the people and with their ideas included, we changed the guidelines. The process is complemented with the relationship with the US – we have already reestablished our diplomatic relations, but the economic blockade or embargo is very complex, so there is an obstacle with our relationship with the world. But we see the light at the end of the tunnel now since the US government has accepted that the blockade was a failed policy,” Diaz mentioned. “US President Barack Obama has declared that he will go to the US Congress and will act on the blockade issue.

It’s going to be a process and it’s not going to happen in one day, but even before this (lifting of the embargo), we want to have a diversified relationship with the world,” he said. In the presentation yesterday by Rivas, she stressed various ways on how to invest in Cuba, mentioning a new law which was passed in Cuba’s parliament last year where she emphasized more guarantees and more incentives for foreign inventors. “We created a special development economic zone to be developed and financed by foreign investors. We have invested a lot in new ports, we have portfolio of foreign investment opportunities and we hope to welcome you all in Cuba,” Rivas said.

Cuba promotes foreign investment on the basis of a broad and diverse portfolio of opportunities and projects. The update will be presented at the upcoming edition of the Havana International Fair, FIHAV 2015. This is a more complete and comprehensive version that includes new projects and sectors, a year after was published the first portfolio consistent with the enactment of Law No. 118 of Foreign Investment, informed Katia Alonso, Business Director of the Ministry of Foreign Trade and Foreign Investment (MINCEX).

The new portfolio comes with a directory of companies that carry out foreign trade operations. With this, the country seeks to encourage the participation of foreign capital in national economic development, the creation of productive chains, and import substitution.

For MINCEX, these are 2 instruments, that serve domestic and foreign businessmen to boost export sectors and import substitution, in addition, they also promote the modernization, infrastructure development and technological change pattern with comprehensive projects.

While providing special attention to professional and technical services, which represent 70% of sales abroad, updating the Cuban export portfolio will include projects designed to generate more productive and business chains in areas where the presence was lower during the first delivery, said the official.

The first version includes 246 projects in all provinces with an amount of USD 8.710 million to attract capital on 11 sectors, which development is strategically important to Cuba, in addition to the Special Development Zone at Mariel, 45 km east of Havana in the port of the same name.

The promotion of foreign investment is one of the most important actions in the process of updating the Cuban economic model, and is based on the importance of investing external resources to steadily raise the growth rate of Gross Domestic Product (GDP).

It has been estimated that in order to achieve proposed GDP, is required to attract foreign investment flows of between USD 2.000 to 2.500 million annually.
According to Law No. 118, the main objective is that Cuba will represent majority stake in the businesses in which the extraction of natural resources is envisaged, the provision of public services, the development of biotechnology, wholesale trade and tourism.

It also establishes that totally foreign capital companies have the possibility of executing complex investments, especially for developing industrial infrastructure.

Cuba and Mexico with Promising Perspectives

Relations between Mexico and Cuba maintain promising perspectives, which will allow to expand trade, cultural and cooperation ties. In that sense, the Ministry of Foreign Affairs of that nation, Claudia Ruiz Massieu, who recently paid an official visit to the Caribbean island, said there is a renewed relationship between the two states, based on their historical ties of friendship and solidarity, which today find a new expression.

She stressed that such renewal seeks to promote this new closeness in several fields such as trade, but also in other areas such as cooperation and cultural exchange.

In this way, Ruiz Massieu said that there is great interest from Mexican companies and industries to increase their presence here, and that they want to be part of this new opportunity that is opening in our relations, she added.

Also, the Minister referred to the deepening of ties in tourism, in education (where both nations signed more than 20 agreements between universities several months ago) and in the cultural sphere (with the participation of more than 300 artists in the International Festival Mayan Culture, where the Caribbean island this year's guest country). On the other hand, Cuban Foreign Minister Bruno Rodríguez said yesterday that there is great potential to develop relations in all fields: cultural, scientific, academic, sporting and economic.

Rodríguez also also thanked Mexico's stance against the economic, commercial and financial blockade imposed on the island by the United States for half a century.

A 2nd flight connecting Cuba to Georgetown, capital of the Cayman Islands, with the city of Holguin, will join the route of Cayman Airways starting from November 28th.

Cuban Prensa Latina news agency reported that direct travel will be on Saturdays with round trip on the same day; a one-hour duration flight that includes international connections from Owen Roberts Airport.

A company release states that this initiative seeks to cover the increasing demand of passengers between the two countries and offer greater opportunities for Canadians and Europeans who visit the Cayman Islands.

Prensa Latina note adds that according to the airline, Holguin city was chosen because it is Cuba's 4th largest city and is located near Santiago and Camaguey, another two cities of great cultural and tourist attraction.

A modern system of thermometry is included among the technological improvements that is now incorporated to the Silos (EMSIL) Enterprise in the province of Matanzas to promote appropriate measures to preserve, store, and market grains in Cuba, said its general director to the local National News Agency.