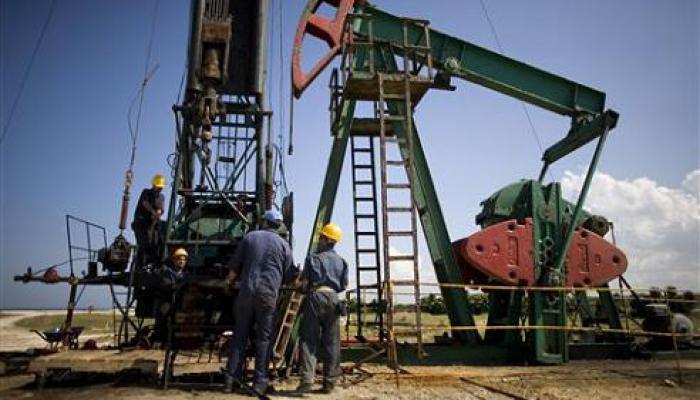 This oil company, which has surpassed the figure for a 16th consecutive year, targets now to reach the remaining 30,000 tons of crude oil by the end of December, as outlined in the company's technical economic plan.

To achieve this, repairs to storage and treatment tanks are currently underway, while efforts to improve drilling in order to obtain greater extraction volumes and better exploit active wells, are also taking place.

The entity is responsible for 60% of heavy crude oil wells located in the country’s northern region.

Last week saw 120 people from the U.S. and Cuba gather in Havana for the Safe Seas Clean Seas Symposium, organized by Hunt Petty LLC, a Houston-based consulting firm. Highlighting ways in which the U.S. and Cuba can cooperate on spill prevention and response, the meeting also represented a first for U.S. companies since diplomatic talks resumed, reports USA Today.

“It’s the first time it’s been possible for a U.S. entity to hold a conference in Cuba,” said Lee Hunt, partner of Hunt Petty LLC and former president of the International Association of Drilling Contractors. “It’s also the first time that business persons and professionals who are American citizens could travel to Cuba for the purpose of participating in such a meeting. It’s groundbreaking in that sense,” he added.

Cuba announced plans in October to resume exploratory drilling despite the prolonged slump in oil prices and weakening demand. The state controlled Cuba-Petroleo (Cupet) aims to begin drilling by the end of 2016 or in early 2017. According to Reuters, opportunities for future U.S. exploration have fueled recent interest in Cuba’s oil sector.

Spill prevention was center at the conference, as Cuba's drilling late next year will happen as close as 50 miles off the Florida coast. USA Today reports that Wild Well Control and Witt O’Brien, two U.S. based companies specializing in emergency response for the oil industry were in attendance eyeing future business opportunities, as was Cameron, a U.S. manufacturer of drilling equipment.

Jay Hakes, former head of the U.S. Energy Information Administration and a speaker at the symposium noted it was “remarkable” how well representatives from the two countries cooperated on the subject of oil exploration and drilling, reports USA Today. Hakes said, “I think the meeting demonstrates that U.S-Cuban relations are moving steadily forward, and energy is playing a big part in that progress.”

Over Half a Million Cubans Are Self-employees

Some 502 thousand 400 Cubans have thus far joined self employment with 31% of the figure being young people and 30% are women.

According to a report by the Cuban Labor and Social Security Ministry, cited by Trabajadores newspaper, the non-state labor activity groups the majority of workers, some 65%, in the western provinces of Havana and Matanzas; in central Villa Clara, and eastern Camaguey, Holguin and Santiago de Cuba.

The reports says that the activities with major participation include catering with more than 57 thousand self-employees, passenger and cargo transportation with some 50 thousand 800, rented houses and rooms with 28 thousand 658; and other activities.

The Labor Ministry explained that 17% of the total of self-employees is also linked to different state economic sectors, where they receive a monthly salary.

A group of former US Congresspersons recently met in Havana with Cuban lawmaker José Luis Toledo Santander, president of the Commission of Constitutional and Juridical Affairs of the Cuban People's Power Assembly, along other deputies.

The visitors, members of the U.S. Association of Former Members of Congress, led by their president Barbara B. Kennelly, showed their interest in the Cuban political system, and had an open, and frank dialogue with the Cuban deputies.

The US politicians thanked the Cubans for the warm welcome and expressed their satisfaction for being in Cuba, some of them for the first time.
We, as an organization, want to strengthen relations with Cuba, and we are willing to do all we can in that regard, said Kennelly.

The visitors learned how the municipal and provincial assemblies of the People's Power work, as well as on the characteristics of the Cuban Parliament.

They also showed surprised when they learned Cuban deputies don't get a salary for being in the Parliament, or that the Cuban Communist Party doesn't get involved in the electoral process.

The numbers were confirmed yesterday by Juan José León, head of the International Affairs Department of the Ministry of Agriculture (MINAG), during a press conference held at the Ministry headquarters.

According to the official, general damages are broken down as follows: $228.7 million U.S. dollars for income lost due to restrictions on exports of goods and services; $128.4 million for losses related to the geographical relocation of trade; $30.5 million related to losses in production and services; and the remainder results from inaccessibility to technology, financial damages and the effects of emigration and the brain drain, in that order.

The overall figure of losses associated with the blockade represents an increase of $144 million dollars, and the highest incidence results from the calculations made on products which the country is unable to obtain, affecting the supply of basic goods. Also affected are items such as rice, beans, corn and coffee, León explained.

The lack of access to spare parts and the latest technology, the reluctance of foreign companies to enter into contracts with Cuba for fear of sanctions, the restrictions on imports and exports, and other aspects impacting on livestock, rice and fruit production, production, among other areas, continue.

Regarding the tobacco industry, losses were estimated at over $149 million dollars. The benefits of the possibility of Cuba’s Premium tobacco entering the U.S. market were also underlined.

The French Bank Credit Agricole agreed last week to Pay US authorities over one billion dollars to settle a dispute for its alleged violations of US sanctions against Cuba, Sudan and Iran.

The total amount of the fine reached 1 billion 166 million dollars, out of which 329 million will go to the US Treasury, 90 million to the Federal Reserve, 385 million to the Financial Service Department in New York state, 156 million will be given to the Fiscal Office of Manhattan and a similar figure for a similar entity in D.C.
With this accord, the French bank settles a dispute related to a "possible civil responsibility" under a probe by the Office of Foreign Assets Control (OFAC).
Most of the suspicious operations would have occurred between 2003 and 2008 through a US subsidiary of the French Bank on an estimated amount of 32 million dollars.

According to OFAC, the French bank issued 173 electronic money transfers lined to Cuba to or through US-based financial institutions for more than 97 million dollars.
Credit Agricole is the second French bank to settled such dispute with US authorities for having violated the laws of the US economic blockade against Cuba and US sanctions on countries blacklisted by Washington as sponsors of international terrorism.

BNP Paribas, the biggest French bank, faced a nearly-nine-billion-dollar fine last year for similar reasons. However, this is the first such case that comes to light after the reestablishment of diplomatic relations between Cuba and the United States.
Though Cuba was withdrawn from the US blacklist, the US blockade and its web of laws still ban the island from using US dollars in its international transactions.

The agreements are designed to show the willingness of the two countries to strengthen their ties in all fields.

Headed by Vice-presidents Dmitri Rogozin and Ricardo Cabrisas, the co-chairs of the Intergovernmental Commission, the ceremony held in Moscow included the signing of an agreement to grant the Cuban government a capital export credit that will finance the modernization of the Jose Marti metallurgic steel plant.
Another agreement establishes the granting of a loan to finance the construction of four generating units of the Maximo Gomez and Este Habana thermoelectric plants in Cuba.

Both governments agreed to participate in the execution of that project, as they expressed in a separate agreement.

For their part, the respective Ministries of Energy signed a protocol on the saved fuel marketing scheme after the implementation of the four blocks in the Maximo Gomez and ESte Habana plants.

Likewise, Cuba's Energoimport and Russia's Inter RAO Export companies signed a contract to expand the capacity of the Mariel and Santa Cruz thermoelectric plants, by a 200 megawatt block.

The parties also agreed on a cooperation agreement between the companies HEBER BIOTEC, and PHARMACO, as the culmination of negotiations held this week between Moscow and a delegation headed by the Vice-president of the Cuban Council of Ministers, Ricardo Cabrisas.

Cuba and South Africa explored business opportunities that will strengthen their trade relations, while opening a business forum between the two countries in Havana last week.

The meeting, which was held at the Protocol Hall of the Cuban Ministry of Foreign Trade and Investment (MINCEX), took place on the occasion of the official visit to the island last week of South African Vice-President Cyril Ramaphosa, along with a large delegation.

Ramaphosa pointed out that the business forum facilitated exchanges between businessmen of both countries, and helped to promote and diversify economic cooperation in new areas of mutual benefit.

However, he stressed that the presence of Caribbean countries and especially Cuba should increase in major commercial events taking place in the South African nation, such as SAITEX.

Odalis Seijo, vice-president of the Chamber of Commerce, announced that another Cuba-South Africa Business Forum will be held on November 3 and 4, within the context of FIHAV 2015.

Cuban experts, recently gathered at a National Scientific Forum on Poultry in Havana, considered the challenges facing the economic sector to recover the efficiency and large production it reported in the two last decades of the 20th century.

Addressing participants, the first vice-president of the livestock group with the Agriculture Ministry, Jose Carlos Gonzalez, recalled a program designed by Cuban Revolution leader Fidel Castro, which provided infrastructure and human capital to the sector and allowed for historic yields in 1991 and 1989.

In this regards, Doctor of Sciences Manuel Pampin, from the Poultry Research Institute, stressed the need to recover the basic elements of that program to increase egg production to 2.5 billion a year. He also referred to the need that workers' salaries must be in direct connection with their production results, to increase efficiency and bio-security in production units and the scientific levels of the staffs, researchers and workers.

The doctor also insisted in the need to introduce modern technology and the latest scientific advances and he explained about the setting up of a joint venture to contribute to replace imports calculated at over 200 million dollars each year, a proposal is included in the country's business portfolio.