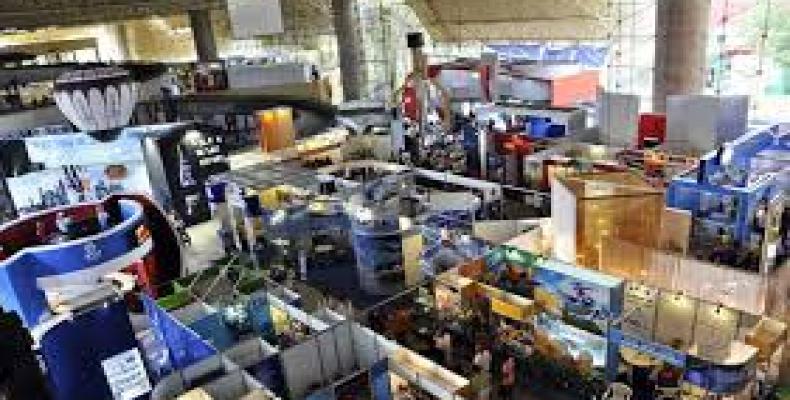 Cuban Minister for Foreign Trade and Foreign Investment, Rodrigo Malmierca, presented in Havana a new portfolio of business opportunities for the foreign capital, as well as the Business Directory, useful tool for every businessmen.

These presentations were held at the Main Pavilion of the 33rd Havana International Fair, Fihav 2015, running here from yesterday to Nov. 7th, with the attendance of exhibitors from more than 70 nations.

Malmierca, also president of the Organizing Committee, said during the opening ceremony that the participation of Cuban and foreign entrepreneurs in this edition has substantially grown, now covering more than 21,700 square meters, aspects that makes it the biggest one of the last 15 years.

In the opening activity of the pavilions of Spain, most represented nation at FIHAV 2015, Spanish Minister of Economy and Competitiveness, Luis de Guindos, said his country will play a key role in the new stage of economic and trade opportunities that opens up in Cuba.

The 8th Session of the Business Committee of Cuba and Russia was also held with the signing of an agreement to repair and supply locomotive wagons, among its main objectives, while The National Days of Venezuela, China, Russia and Slovakia were held yesterday with the presence of Council of Ministers vice president, Ricardo Cabrisas, who reviewed the bilateral cooperation and stressed the essential role of businesses in achieving their objectives. U.S.-Cuba Business Council, founded last September in Washington.

In this tone, Rodrigo Malmierca, received over 50 businessmen from major US companies, such as Morgan Stanley, Home Depot, Caterpillar, Boeing, American Airlines, Heinz Kraft, Fox News, The Wall Street Journal and Sprint, among the first companies interested in sharing with the Cuban side, represented by officials and businesspersons from tourism, health, industry, telecommunications, banking, transportation and energy and mines.

Just before the meeting, Malmierca received Myron Brilliant, the executive vice president of the Chamber of Commerce of the USA, who heads the US delegation.

Cuban and American telecommunication companies ETECSA and Sprint, respectively, signed an agreement to provide roaming services directly between both countries, during the 1st day of the 2015 Havana International Trade Fair.

According to the Cuban official, this contract will enable Sprint's clients to make and receive calls, send and receive e-mails and transfer data using the ETECSA network on their own phones.

Last September 22nd, the companies had signed an agreement to have direct interconnection through the Underwater Cable System ALBA-1 that allows the making of direct calls between Cuba and the States.

Mr. Claure said this was a special day for Sprint since its 60 million customers now can use their cell phones if they come to Cuba, as they do anywhere in the world, and added it had also been a nice surprise seeing Cuban people in Havana's parks browsing the net and getting in touch with their families and friends abroad.

ETECA announced the beginning of the services will be once they finish the technical tests and after working out the details of the financial operations; however, the Cuban representative finally said customers will pay through 3rd countries' banks and in any currency but the US dollars due to the US blockade of Cuba's regulations.

Spain Announces Reorganization of Cuban Debt in the Short Term

Spanish Minister of Economy and Competitiveness Luis de Guindos has announced the reorganization of the Cuban debt with his country in the short term, as the first and special step in the economic and trade relations with the island.

Participating in the 33rd Havana's International Fair (FIHAV 2015) and heading an extensive Spanish delegation, De Guindos said it was an action that shows the importance that his country grants to its relations with Cuba and its companies and the decision to contribute to its development.

Spain has made an effort to increase these relations since the middle of last year, by means of granting secure credit lines to cover several operations. Besides, it has prepared a 40-million-euro financing for different projects and the realization of several negotiations.

As part of the Day of Spain in FIHAV-2015, De Guindos, together with the Spanish Minister of Industry, Energy and Tourism Jose Manuel Soria, signed two collaboration agreements with the Cuban side and the same number of memorandums of understanding regarding finances, energy, industry and science and technology.

In this reference, he called the Spanish business community to invest in the island, to be confident in the Cuban market and increase the business levels of exports and imports.

Cuba's most famous brand of rum, Havana Club, is ready to enter the US market as soon as Washington lifts its trade blockade against Cuban products, local media reported today in Havana.

"Our greatest wish is to be able to sell our products directly in the US so that the US consumers can enjoy a high quality rum," said Jerome Cottin-Bizonne, general manager of Havana Club International, a joint venture between state-run Cuba Ron and the French Pernod Ricard company.

Founded in 1993, Havana Club International was one of the first joint enterprises established by Cuba, and its Havana Club rum ranks 24th on the list of the 100 most sold spirits in the world.

The company's executives estimated that they could sell 1 million nine-liter cases in the US market upon the lifting of the blockade.

The sales of the company reach up to 4 million nine-liter cases each year in more than 140 countries, with Germany, France, Britain, Italy and Chile being the main customers.

The trade blockade imposed by Washington against the Caribbean island prevents Havana Club rum from being sold in the US that absorbs 40% of the world's rum production.

Though direct exports are prohibited, US President Barack Obama's administration has allowed citizens that travel to the Island to return with rum and tobacco since January as a way of easing the blockade; however, each US citizen cannot bring back Cuban goods worth more than $100.

Ricardo Cabrisas, Vice-President of the Cuban Council of Ministers, received and talked last Monday afternoon with Luis De Guindos Jurado, Minister of Economy of Spain, who is in Cuba on an official visit.

The two executives exchanged on several topics of the bilateral agenda, with focus on trade and economic development, and assessed the potential of bilateral collaboration that led to pen an official Agreement on the refinancing of the short-term Cuban debt with Spain, which will boost trade between the two countries.

The Spanish minister was accompanied by the Secretary of State for Commerce Jaime García-Legaz Ponce, and the Ambassador to Havana, Juan Francisco Montalbán Carrasco.

Air China will begin on December 27th a direct flight from Beijing to Havana, connecting China and the Caribbean for the first time, both governments announced.

A Boeing 777-300ER aircraft will take off from Beijing 3 times a week, with a stop in Montreal, Canada, previously passing through Spain, Germany, France, or Mexico.

Chinese citizens do not require visas to enter Jamaica, Bahamas, Granada and Turks and Caicos Islands and after coming this new connection into force, this could increase Chinese tourism to the region, according to experts.

The trade and economic ties between China and the Caribbean countries show a healthy growth, and this initiative reflects the improvement of exchanges between both parties, especially between Beijing and Havana, which are celebrating the 55th anniversary of diplomatic ties this year.

Vice-President of the Cuban Council of State, Gladys Bejerano, recently reaffirmed in Moscow the most absolute commitment from her country in fighting corruption, after speaking at the 6th United Nations Conference on that issue.

During the 6th Conference of the States Parties to the United Nations Convention Against Corruption taking place in St. Petersburg, the also Cuban General Comptroller recalled that battle is an indissoluble part of the history of the island.

At present, it is vital for the progress of the social agenda and the updating of the Cuban economic model, approved by the people, to achieve a prosperous and sustainable socialist development, she said.

After reporting on the active preventive work and confronting this crime, Mrs. Bejerano stressed that the implementation of the recommendations received during the first review of this UN Convention is inserted in the Cuban programs, which are going properly.

The state and government policy is defined to prevent and confront the facts of corruption, based on law, control, interdisciplinary, transparency and accountability in the exercise of public functions with fully public participation, the Comptroller stressed.

Bejerano said that from early ages, Cuba has encouraged teaching values and ethical principles in the family and the school.

The vice-president of the Cuban Council of State said that Havana is working hard in training managers and officials to strengthen the competence, integrity and transparency in public administration.

The 6th Conference of the States Parties to the United Nations Convention Against Corruption opened on Tuesday, November 3rd in LenExpo, the biggest congress center of St. Petersburg, and will run until tomorrow, Friday.