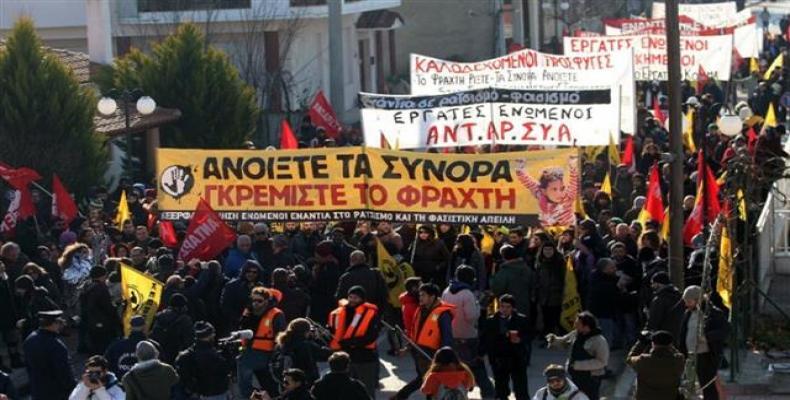 Athens, July 25 (RHC)-- Police in Greece have clashed with a group of protesters demanding that borders be opened to incoming refugees in the northern town of Kastanies.  Police fired tear gas and stun grenades over the weekend to disperse the protesters, who were from the pro-refugee group No Border Camp.

The demonstrators, who were angry at the governments refugee policies, were trying to break a police cordon.  They were chanting “Open the Border” and holding placards reading “Beyond Borders.”  The border camp is known for a policy of returning the refugees who have reached Greece from Turkey via boats back to the latter country.

Greece and Italy are entry points into the European Union for thousands of refugees fleeing conflicts in North Africa and the Middle East.  Figures by the United Nations' refugee agency, the UNHCR, show that about 1.3 million refugees reached Europe via sea in 2015 and more than 238,000 others have reached Europe so far this year.

In March, the EU and Ankara reached a deal to have the irregular refugees returned to Turkey. Under the deal, new arrivals on Greek islands after March 20 face deportation to Turkey unless they successfully apply for asylum in Greece.

As part of the EU-Ankara deal, Greece has since April 4th started deporting to Turkey the refugees who do not meet asylum-seeking criteria.  The future of the deal, however, is unknown following tensions that have emerged between Ankara and the EU amid a Turkish crackdown following a failed coup in Turkey.

Europe is facing an unprecedented influx of refugees.  Many blame major European powers for the unprecedented exodus, saying their policies have led to a surge in terrorism and war in those regions, thus forcing more people to flee their homes.