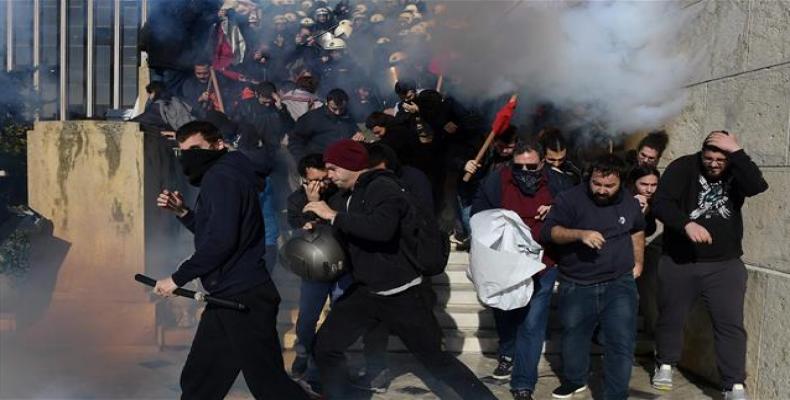 The protests are against a proposed bill awaiting a vote in parliament, aimed at cutting public spending and limiting civil rights of labor and unions.  The austerity bill, which is to be voted on this week, will limit the right to strike and speed up property foreclosures.  The Greek government has described the new measures as minor reforms.

The measures, which were dictated by the international lenders as conditions to receive a final bailout, are considered to be potentially the last major package of cuts before Greece heads toward the end of the bailout program in August.  Giorgos Perros, a senior member of the Greek Communist Party and a lead organizer of the rally, vowed that protests would intensify ahead of the parliament's vote.

The protests include a three-hour work stoppage by air traffic controllers.  Public transport and public hospital workers are also scheduled to join the protests.

Organizers of the protests say that if the bill is approved, Athens would receive about five billion euros in loans.  The government plans to pump the new money into the country’s economy, giving it a boost to return to full market financing by August after it crashed eight years ago in 2010.

Critics, however, are weary of the spending cuts, claiming that Prime Minister Alexis Tsipras failed to deliver on his election promise of putting an end to austerity measures.