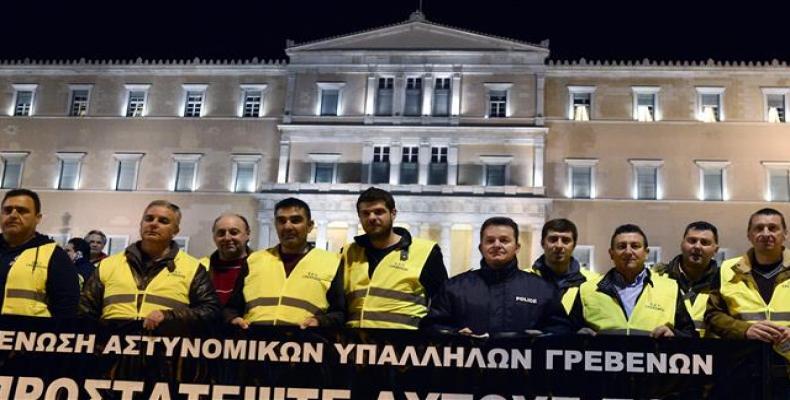 Athens, February 23 (RHC)-- Hundreds of uniformed personnel from the Greek police, coast guards and firefighting forces have staged a rally against the government’s recent approval of more austerity measures.

Some 1,200 protesters gathered outside the Greek parliament in central Athens to voice their discontent with further budget cuts and tax rises linked to a foreign bailout program for the country. They also called for more jobs, pay increases, and better pension benefits.

Chanting anti-government slogans and holding banners that read “Stop cuts, we can take no more,” the protesters marched peacefully on the parliament building.  “For two years, this government has been fooling those of us who wear uniforms. Firstly with our wage issues — they had promised... to reinstate our wages to 2012 levels, but not only have they not done so, they are preparing new wage cuts,” said Yannis Katsiamakas, the president of the Greek Police Officers’ Union.

Dimitris Saitakis, the president of the Greek Coast Guard Officers’ Union, who was attending the protest rally, said: “We have very serious problems, and if they don’t pay attention, the whole edifice will collapse very soon.  That’s why we are here, to demand not just our rights, but the rights of Greek society that is asking us for safety.”

Greece has witnessed increased rallies since Monday, when Athens and its European creditors reached an agreement to resume stalled talks on the bailout program; however, the agreement came only after the government promised to introduce more austerity measures.  Athens has been dependent on international bailout funds since 2010, when the Greek economy entered stagnation.

Nearly seven years of austerity has culminated in a spike in poverty levels in Greece. The southeastern European country also has the highest unemployment rate — 23 percent — in the European Union.