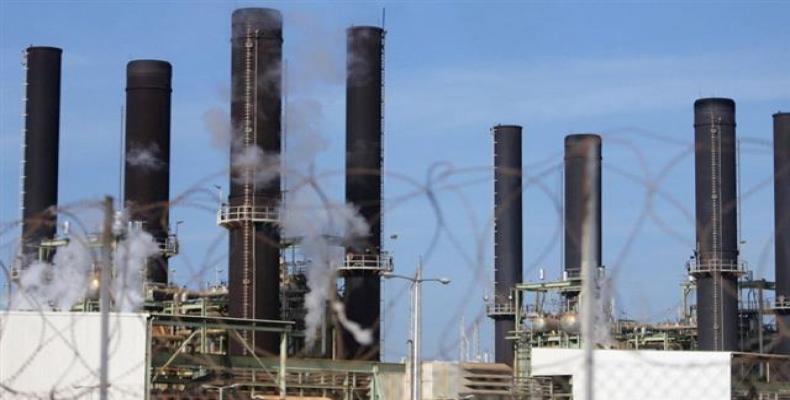 The Gaza Energy Authority announced the news in a statement on Monday, adding that Israeli authorities "began to reduce by eight megawatts electricity flow" into the Palestinian enclave. It also warned that the "dangerous" reduction would have "serious effects" on the crisis-hit territory.

It further said that the cutback was expected to reduce the amount of the mains electricity supplied to blockaded sliver by at least 45 minutes of the daily average of four hours of power that Gaza's nearly 2 million inhabitants receive from an Israeli power plant, which provides them with some 125 MGW a month, or 30 percent of the total mains electricity needs of the enclave.

Israel’s decision was reportedly made after the West Bank-based Palestinian Authority (PA), led by President Mahmoud Abbas, slashed its monthly payments for the power supplies to Gaza by 30 percent.

Israel said that it would not cover the shortfall in PA payments, and PA argued that it could no longer foot all the bill for electricity in Gaza.  The Palestinian Authority says so far it has paid $12.65 million as a monthly bill to the IEC for Gaza's needed share of power.

The IEC also confirmed the cutback in a statement, adding that the measure had been adopted "in accordance with" a Tel Aviv's "directive."

"The internal deliveries of electricity to consumers inside the Gaza Strip is not the responsibility of the electric company and is done by internal Palestinian authorities in the Gaza Strip," it further said, adding that the shipments would be scaled back gradually.

Gaza’s only power plant was forced to shut down in early April after it remained without fuel. Three electricity lines set up by Egypt and reaching into densely-populated Gaza are capable of providing 27 MGW of mains electric power per day but are rarely operational.

On last Wednesday, Amnesty International and 15 other rights groups, including the Israeli B’Tselem, Peace Now, and Rabbis for Human Rights, said in a joint statement that they had asked Israel’s Attorney General Avichai Mandelblit to “advise” pertinent Israeli official “to immediately rescind [the] decision to reduce the supply of electricity sold and provided by Israel to the Gaza Strip.”

Furthermore, the UK-based Amnesty also warned in a separate statement on Wednesday that the power cut would lead to a “looming humanitarian catastrophe.”

The Gaza Strip has been under an Israeli siege since June 2007. The blockade has caused a decline in living standards as well as unprecedented unemployment and poverty there.

Israel has also launched several wars on the Palestinian territory, the last of which began in early July 2014.  That Israeli military aggression, which ended on August 26, 2014, killed nearly 2,200 Palestinians.  Over 11,100 others were also wounded in the war.