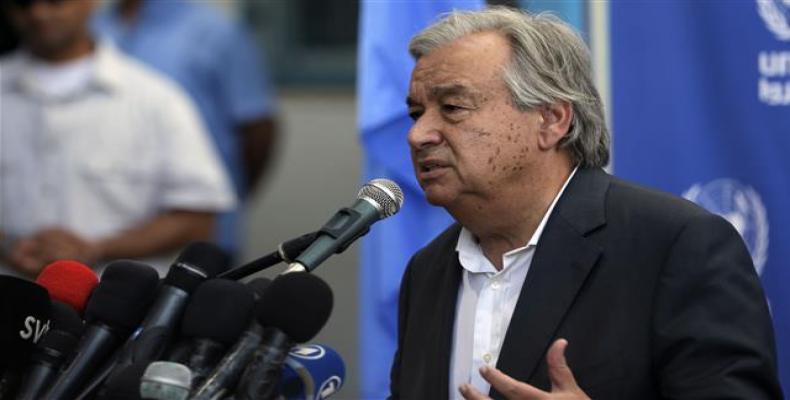 United Nations, September 6 (RHC)-- United Nations Secretary General Antonio Guterres has called on members of the Security Council to agree on a unified strategy to deal with North Korea and to avoid using "confrontational rhetoric."

"The unity of the Security Council is absolutely crucial," said the UN Secretary General on Tuesday, while urging countries "to come together with a single strategy to deal with the government of the DPRK."

The remarks were made one day after the U.S. traded barbs with Russia and China over a suitable response to Pyongyang’s sixth and most powerful nuclear test so far.

"Confrontational rhetoric may lead to unintended consequences.  The solution must be political," Guterres said, adding: "The potential consequences of military action are too horrific."

Earlier in the week, U.S. Secretary of Defense James Mattis threatened North Korea with a “massive military response,” but he stopped short of threatening the country with a nuclear attack.  On Monday, U.S. Ambassador to the United Nations Nikki Haley said that North Korean leader Kim Jong Un is "begging for war."  She said: "Enough is enough.  War is never something the United States wants.  We don't want it now.  But our country's patience is not unlimited."  And she added: “We have kicked the can down the road long enough.  There is no more road left.”

During a conversation with Japanese Prime Minister Shinzo Abe, U.S. President Donald Trump said he is ready to use its nuclear weapons against North Korea.

Tensions on the Korean Peninsula have heightened since Washington recently engineered tougher sanctions in the United Nations Security Council over the North’s testing of two intercontinental ballistic missiles.