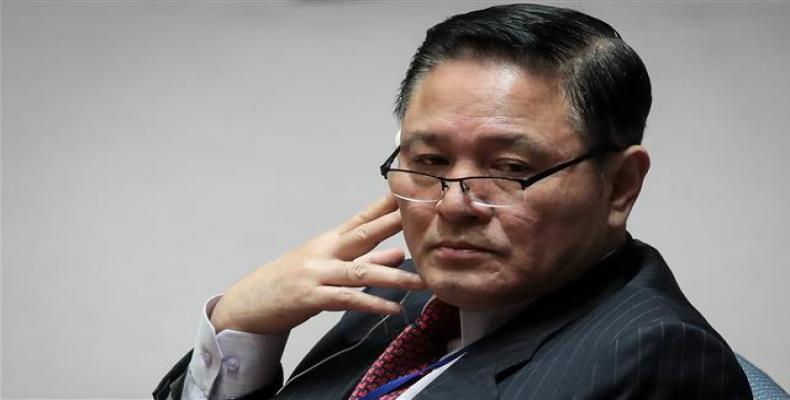 United Nations, December 16 (RHC)-- North Korea says it will not pose any threat to any country as long as its interests are not infringed upon, disregarding a U.S. call for terminating the Asian country's weapons tests as a pre-condition for negotiations on its nuclear and missile programs.

North Korea's United Nations Ambassador Ja Song-nam made the remarks on Friday, three days after U.S. Secretary of State Rex Tillerson initially offered to begin direct talks with Pyongyang without pre-conditions.  However, Tillerson's unexpected overture and backing away from a key Washington demand that the North must first accept that abandoning its nuclear arsenal would be part of any talks, did not last long.

Apparently contradicting Tillerson, the White House said on Wednesday that no talks could be held with the North as long as it did not -- quote -- "improve its behavior."  Washington declined to say whether President Donald Trump, known for harsh rhetoric against Pyongyang, approved of Tillerson's overture.

Earlier on Friday, Tillerson took back his offer of unconditional talks, saying North Korea must "earn its way back" to the negotiating table.  The top U.S. diplomat, who was speaking at the UN Security Council, added that a "sustained cessation of North Korea's threatening behavior must occur before talks can begin," urging council member states to further isolate the North.

Tillerson ostensibly changed his stance dramatically after coming under pressure from the White House.

The North Korean envoy, however, made no mention of Tillerson's call in his speech to the session, which he described as "a desperate measure plotted by the U.S. being terrified by the incredible might of our Republic that has successfully achieved the great historic cause of completing the state nuclear force."

On Thursday, UN Secretary General Antonio Guterres warned the international community against the danger of "sleepwalking" into a war with the North over its nuclear and missile programs, saying such a war would have "very dramatic circumstances."

North Korea has been under a raft of crippling UN sanctions since 2006 over its nuclear tests as well as multiple rocket and missile launches.  Pyongyang has firmly defended its military program as a deterrent against the hostile policies of the U.S. and its regional allies, including South Korea and Japan.

Washington has tens of thousands of troops in the region, including in South Korea and Japan, and routinely threatens the North with military action to stop its weapons programs.