At Least 27 People Killed in Church Shooting in Texas 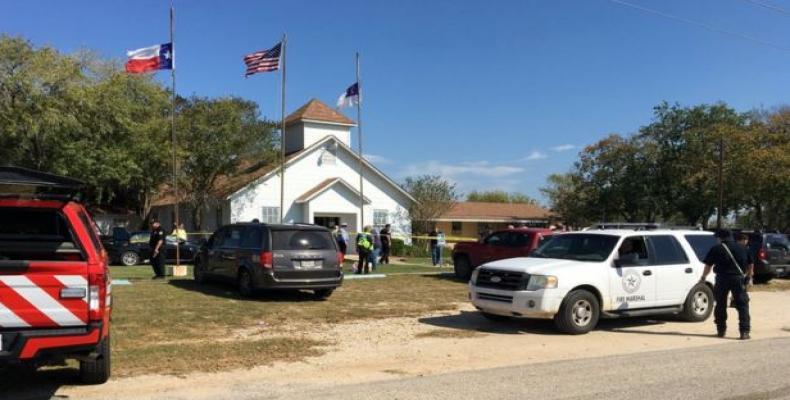 Texas, November 6 (RHC-Agencies) -- A gunman armed with an assault rifle killed at least 27 people at a church in Texas on Sunday.

The shooting at the First Baptist Church in Sutherland Springs, Wilson County, was carried out during the 11:00am Sunday service.

Those who were killed ranged in age from five to 72 years old, officials said.

The new shooting came little more than one month after the deadliest incident of its kind in recent US history, when a gunman on October 1st killed 58 people attending a concert in Las Vegas

The local police confirmed that the shooter was deceased.

Authorities said he entered the church and opened fire. He then dropped his weapon and fled the church after a local resident used his own gun to engage. The suspect led police on a brief car chase until he crashed his vehicle.  He was later found dead.

Police said it was unclear whether the suspect took his own life or was killed by officers.

"As a state we are dealing withthe largest mass shooting in our state's history," said Texas Governor Greg Abbott.

US President Donald Trump, who is visiting Japan, offered condolences and told reporters on Monday: "We have a lot of mental health problems in our country, but this isn't a gun situation."

The Mass Shooting Tracker watchdog has recorded at least 24 mass shootings in the country this month and some 1,495 so far this year.