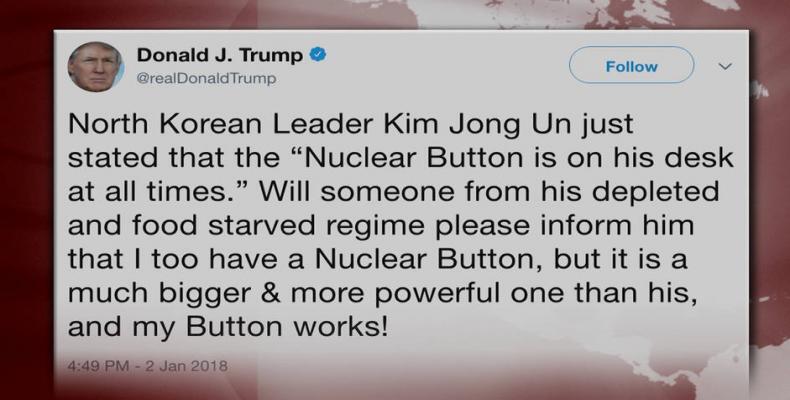 Washington, January 5 (RHC)-- U.S. President Trump’s tweet in response to a recent threat by North Korea’s leader about his "nuclear button on his desk" has sparked a backlash while renewing fears about the possibility of a nuclear war.  The U.S. president had tweeted that he had a “much bigger & more powerful” nuclear launch button than North Korean leader Kim Jong-Un.

"North Korean Leader Kim Jong-un just stated that the 'Nuclear Button is on his desk at all times.' Will someone from his depleted and food starved regime please inform him that I too have a Nuclear Button, but it is a much bigger & more powerful one than his, and my Button works!" Trump said in a tweet on Tuesday.

The U.S. president’s reply came a day after Kim used his televised New Year’s Day speech to warn Washington that "The entire United States is within range of our nuclear weapons, and a nuclear button is always on my desk.  This is reality, not a threat."

Eliot Cohen, a State Department official in the George W. Bush administration who has been an outspoken critic of Trump, said the president’s provocative comments were dangerous and juvenile and suggested his aides should rein him in.  “Spoken like a petulant ten year old.  But one with nuclear weapons — for real — at his disposal.  How responsible people around him, or supporting him, can dismiss this or laugh it off is beyond me,” Cohen tweeted.

Lawmakers, national security experts and media figures, most of them already vocal critics of the president, voiced deep concern over Trump’s tweet, calling it rash and unnerving for a man who has thousands of nuclear weapons at his disposal while confronting an unpredictable, nuclear-armed enemy.

Democratic lawmakers called for a new measure that would require Trump to gain congressional approval for a preemptive nuclear strike against North Korea.  "Congress needs to pass this Monday — on the first day of votes in 2018 — legislation restricting Trump’s ability to launch a preemptive nuclear strike without authorization,” tweeted Rep. Ro Khanna (D-Calif.), a member of the House Armed Services Committee.

Secretary of Homeland Security Kirstjen Nielsen on Tuesday said “the president speaks for himself” in response to a question about the button tweet.  "I think we have to continue, as he said, to take the threat from North Korea very seriously,” Nielsen told reporters.  “Certainly at DHS we're doing all we can to prepare for any possible scenario that would involve the homeland, whether it be from North Korea or any other nation state or terror-status area.”

Trump’s tweet on Tuesday night came at the end of a busy day on the social media platform for the president, though it followed a period of uncharacteristic silence from Trump on North Korea.  Asked about Kim's remarks earlier this week, the president simply said, “We'll see.”

Some of Trump’s fiercest critics went as far as to say the president’s tone and temperament were enough to warrant his removal from office.  "This Tweet alone is grounds for removal from office under the 25th Amendment.  This man should not have nukes,” tweeted Richard Painter, who worked as an ethics lawyer for President George W. Bush.

The 25th Amendment of the Constitution allows for the vice president and the majority of the Cabinet to declare the president "unable to discharge the powers and duties of his office" and remove him.  It has never been invoked.

Rep. Jim Himes (D-Conn.), who sits on the House Intelligence Committee, expressed fear that Trump’s tweet could result in a fatal miscalculation with North Korea.  “That would get real very quickly,” Himes said on CNN.  “I guess the president regards this as a show of strength,” the congressman added. “But as everybody who has ever been on a first-grade playground recognizes, it’s usually the person who is most aggressively pounding their chest that is in fact the weak one.”