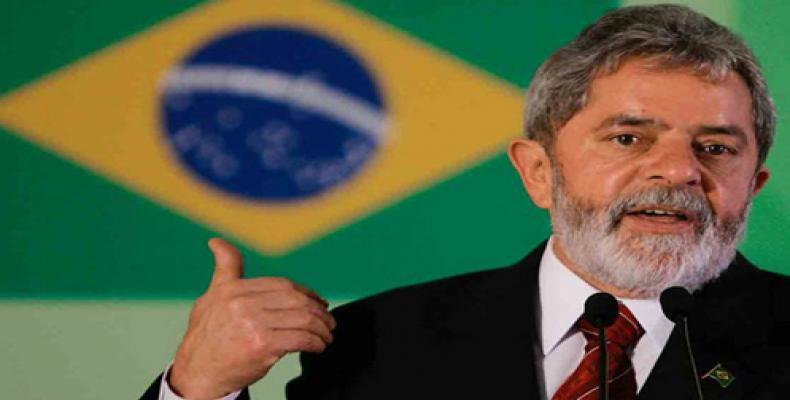 Brasilia, July 9 (RHC)-- A series of rallies, mobilizations, and concerts are planned as activists and politicians continue to demand the release of former Brazilian President Luiz Inacio Lula da Silva.  Supporters are also calling for Lula, who leads all opinion polls ahead of the country's presidential elections, to be allowed to run when the election takes place in October.

During a visit to Lula at the federal police headquarters in Curitiba, Joao Pedro Stedile, national coordinator for the Landless Workers Movement (MST), and Rui Falcao, former president of the Workers' Party, announced the series of popular demonstrations.  The actions include a signed petition addressed to Brazil's Supreme Court and Superior Court of Justice calling for Lula's release.

Falcao said Lula is very concerned about national sovereignty.  “He warned about the fact that the current government (led by Senate-imposed president Michel Temer) is handing over our wealth, that the country is in liquidation.”  Lula, for his part, told his visitors that Brazil's political system is “rotting” and, if re-elected for a third term as president, will call a constituent assembly.  “Nobody can withstand this filth.  The right has no candidate.  Brazilian politics is rotting.  My government solution will be to call a constituent (assembly).”   Lula then told Pedro Stedile to “tell the Brazilian people that I am, indeed, a (presidential) candidate and that I will fight for it.”

According to reports from Brazil, well-known singers and composers Gilberto Gil and Chico Buarque are organizing a Free Lula music festival in Rio de Janeiro on July 28th.   On the following day, a caravan originating in the interior of Brazil's northeastern region will travel south to Curitiba to support Lula's presidency.

Beginning on July 31st, eleven representatives from different social movements will go on a hunger strike in front of Brazil's Supreme Court to demand Lula's release.  And, on August 15th, thousands will march to the Supreme Electoral Court to deliver Lula's registration as a presidential candidate.

Having been detained at the federal police headquarters in Curitiba since April 7, for allegedly receiving an apartment as a kickback in the national Car Wash corruption scandal, Lula has topped every 2018 electoral poll conducted by Vox Populi, Ibope, Datafolha, Data Poder 360, Instituto Parana, the National Confederation of Transportation/MDA and Ipsos.

His two terms in office were marked by a number of social programs, lifting millions of Brazilians out of poverty and removing the country from the United Nations World Hunger Map.  Lula da Silva left office with a record approval rating of 83 percent in 2011, according to Datafolha.