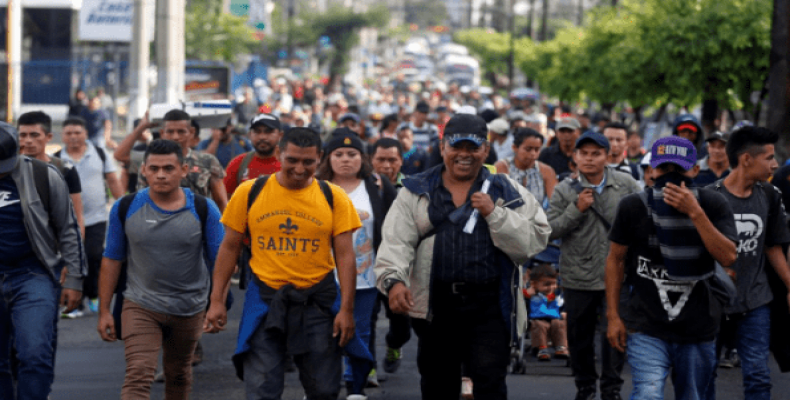 San Salvador, October 30 (RHC)-- Inspired by the over 7,000 migrants who have left out of Honduras and Guatemala over the past two weeks, a group of migrants have left El Salvador to be a part of the Migrant Caravan or Central American Exodus as it is being called by participants.  The migrants are heading north in order to escape the overwhelming violence and inequality in their countries and seek refuge in Mexico and the United States.

A group of more than 300 Salvadorans left San Salvador, taking the same trek as the original Exodus that left Honduras on October 13th that gathered additional asylum seekers in Guatemala along the way and is now in Tapantepec, Mexico in Oaxaca state.

Salvadoran police traveled with the group as migrants carried their backpacks and water bottles, protecting themselves from the hot sun with hats.  Some mothers pushed their children in strollers.

Trump and Republicans have sought to make immigration a major issue before the November 6th elections, in which the party is battling to keep control of Congress.  The largest portion of the Exodus, approximately 4,500 to 6,000 people, rested in Tapantepec, Mexico over the weekend, prior to being blocked by the police about 12 km north of Arriago.

Cell phone service was also blocked, according to Amelia Frank-Vitale, Ph.D. candidate and expert in Central American migration.  She told teleSUR after being embedded with the group for several days: “There was a big assembly and most people are pretty eager to keep moving but for a number of reasons people decided to stay one more day in Tapantepec and head to Niltepec later.”

She said the group’s “general enthusiasm and spirit is pretty amazing."  Frank-Vitale says of the group's unity: “There's a difficult but beautiful democratic process happening here when decisions are made.  People get up and speak.  There are assemblies that everyone is involved in who want to be and by a show of hands or noise, decisions are made.”

While leaving out of San Salvador, 49-year-old caravaner Hernan Quinteros shouted to those he traveled with: “We’re asking the all-powerful to look after us, to guide us, to free us from all that is bad,” reports AP.

El Salvador’s government said it had solidarity with the migrants and respected their right to mobilize, but urged them not to risk their lives on the way.