Flooding in Tijuana forces relocation of thousands of migrants 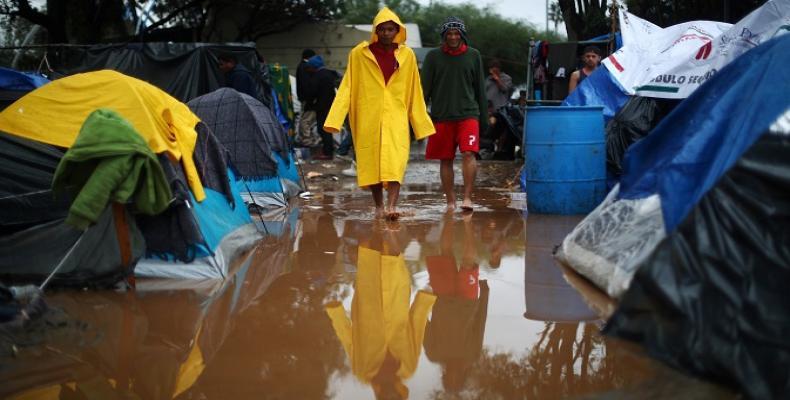 Tijuana, December 1 (RHC)-- Thousands of Central American migrants have been relocated after rains flooded the sports stadium they were using as a shelter in the Tijuana, Mexico.  Many migrants who are traveling north in large groups -- commonly referred to as caravans -- fear the move is an attempt to divide them.

“The people in the first shelter were afraid that it was a lie or that they only wanted to divide the caravan so very many decided to stay in the stadium although it was in shambles,” teleSUR correspondent Alina Duarte reported.

Amid state violence near the United States border, thousands of migrants who refer to themselves as part of the Central American exodus have taken shelter in a sports complex in the Mexican port town as they await entry to the U.S. border.

Families, unaccompanied minors, and others have been sleeping outdoors, as well as on cold floors and mats in the stadium.  Illnesses have been spreading due to poor conditions.  Overcrowding, cold temperatures, and rain have caused diseases -- including chicken pox, lice, and the flu -- to spread among those seeking refuge, city officials told Reuters.

“There were already more than 6,000 migrants in the shelter of Tijuana, but today everything collapsed with the rains.  It was horrible, everything was under water,” Duarte said.  “They are being moved to a new shelter 40 minutes away.”

While rains fell earlier this week, Mexican police arrested more than a dozen migrants from the caravan approaching the border crossing of El Chaparral.

"It's unfair what the police are doing, what we're fighting is a right," said Gerson Madrid, a 22-year-old Honduran who began the trip to the U.S. in early October.  To bring awareness to the issue, Madrid said the group was beginning a three-day hunger strike.