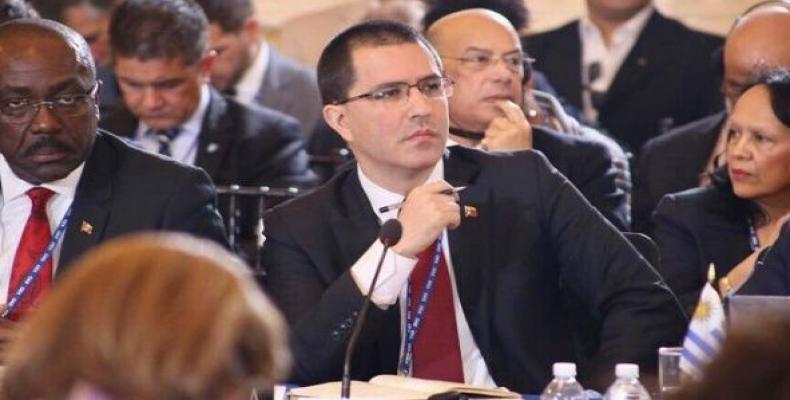 Vienna, June 28 (RHC)-- Venezuela’s Foreign Minister Jorge Arreaza spoke Thursday at an international forum in Vienna, during which he condemned the United States for wanting to colonize the Bolivarian country, and for trying to starve the country out using economic war to oust President Nicolas Maduro and install an allied government.

The forum “Unilateral and Coercive Measures” in international politics was organized by the Venezuelan, Cuban and Iranian diplomatic missions in Austria, in which delegates sought to discuss the nature of U.S, attempts to sanction and isolate countries in the global system, and strategies to overcome it.

"The United States tries to implement a campaign of killing the Venezuelan people through hunger, applying measures that affect the entire economy and the entire population," said Arreaza.  The Venezuelan top diplomat went on to argue that the White House has gone about this through their domination of international financial mechanisms.

“The control of the world monetary and financial system by the U.S. has facilitated the blockade on the resources of the Venezuelan people, there are 5 billion dollars withheld in banks around the world," he added in reference to the large deposits of public money in foreign banks that Venezuela is not allowed to access ever since the U.S. tightened their economic sanctions.

These include $1.4 billion in gold reserves held in the Bank of England and the multibillion-dollar assets and accounts held by Citgo, formerly a Venezuela state subsidiary, but which has since been seized by the U.S. and handed over illegally to the opposition lawmaker Juan Guaido, who had declared himself "interim president" in January in violation of the country's constitution.

U.N. special rapporteur Idris Jazairy was also in attendance. He spoke denouncing the effects of sanctions, and commenting that it’s not just economic sanctions that are damaging, but that even sanctions on individuals such those banning travel of government officials can impede countries from being able to negotiate international deals to bring about economic development and humanitarian relief.

A recent study by U.S. economists Mark Weisbrot and Jefferey Sachs found that over 40,000 Venezuelans have died due to the economic asphyxiation brought about by U.S. sanctions.  The blockade has stopped Venezuela from accessing international money markets, making imports difficult or even impossible to acquire, which has particularly affected the medical sector as most medicines have to be purchased abroad.