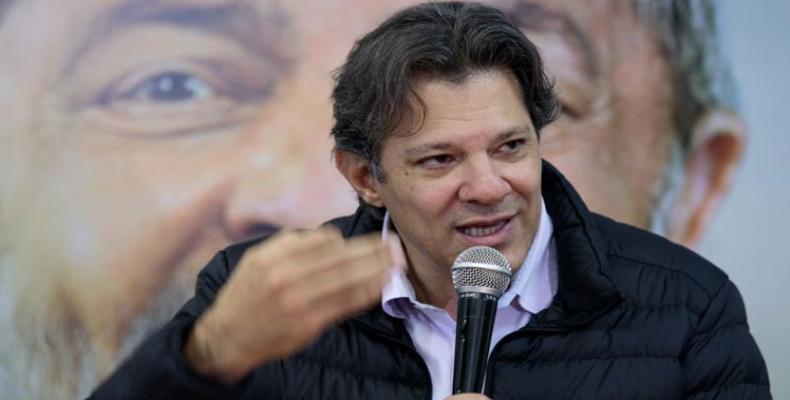 Brasilia, August 22 (RHC)-- Right-wing Brazilian attorneys are trying to lock up the former presidential candidate of the Worker's Party, Fernando Haddad, accusing him of false charges.

Sao Paulo's First Electoral Court on Tuesday charged Fernando Haddad, who was the runner-up in the 2018 presidential elections, accusing him of mismanaging campaign accounts when he ran for mayor of Sao Paulo in 2012.  The Workers' Party leader faces up to four and a half years in prison.

Under the terms of the sentence, Haddad will be obliged to spend his nights in jail but be allowed out of prison during certain hours during the day.  Prosecutors alleged that his campaign team presented 258 false expense claims for printing services.  This fragile and unfounded argument, however, aroused immediate public reactions.  Among them, for instance, the PT National Executive Commission labeled the electoral court sentence as a form of violence against the rule of law and a serious offense against justice.

"The ruling goes against witnesses and evidence of Haddad's innocence, which had already been recognized by the Sao Paulo Justice Court, and condemns him for an offense he had not even been charged with, in an affront to the right of defense and due legal process," the PT holds.

“The ruling denotes hateful political persecution of the PT candidate, who received 47 million votes in the last presidential elections. It is further evidence that the Brazilian judicial system has been used illegally and criminally to satisfy political, electoral and economic objectives.”

The Workers ’Party also recalled that the Brazilian far-right has been implementing an aggressive "lawfare" against its main leaders over the last four years.  As a consequence of legal manipulation,  Brazil's former president Luiz Inacio Lula da Silva is a political prisoner since April 2018 and Dilma Rousseff was dismissed from the presidency for alleged administrative misconduct.

Fernando Haddad, a professor who served as Education Minister from 2005 to 2012, was the Workers' Party candidate in the 2018 presidential election, replacing Lula da Silva, whose candidacy was barred by the Superior Electoral Court.

Haddad faced then far-right politician Jair Bolsonaro, a former army captain who became President and appointed as Justice Minister Sergio Moro, a former judge who has been the center of a political scandal in recent months due to the publication of messages showing his role in the imprisonment of Lula da Silva