Brazilian presidential candidate says Lula will not accept a pardon 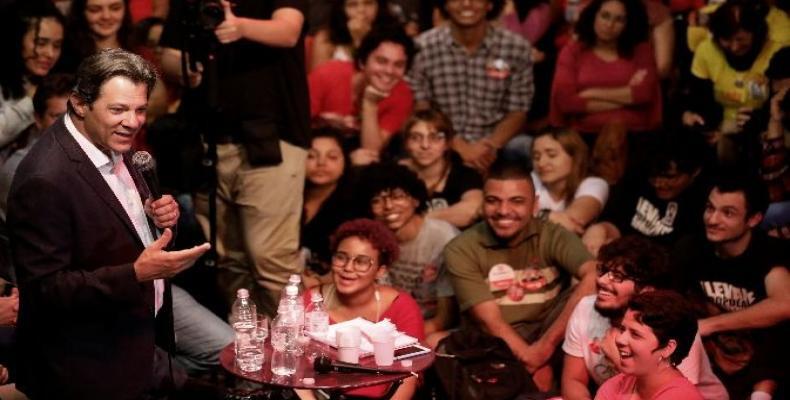 Brasilia, September 20 (RHC)-- Brazilian presidential candidate, Fernando Haddad of the Workers' Party, told reporters that former Brazilian President Luiz Inacio Lula da Silva will refuse a pardon and will not exchange his dignity for freedom.  The remarks came shortly after Haddad visited Lula at the federal police station in Curitiba, Parana where he has been detained in solitary confinement since April.

"Our internal research is also very favorable, but (Lula) said don't be too influenced by polls.  There's plenty of work ahead. We have three more weeks. A poll is a sketch.  It has a certain degree of importance but it shouldn't serve as a mechanism that moves our campaign.  Our campaign must be moved by proposals, respect for democracy, strengthening institutions and respect for our adversaries."

Haddad emphasized that his government plan revolves around two emergency pillars: jobs and education.  To create more jobs and boost the economy, the former Minister of Education and mayor of Sao Paulo stressed the need for tax and bank reforms favoring the poor and middle class.  The move also envisages a greater capacity for public budgets, allowing federal, state and municipalities to spend more on job creation programs.

To improve public education, Haddad said his administration's priority would be to increase investment in teachers and under-performing public schools.  He mentioned that part of his plan includes ideas and initiatives put forth by Lula.

Lula handed over his presidential candidacy to his running mate, Haddad, at a PT event in front of the prison in which the former president has been held since April over a controversial corruption conviction.  Many legal experts believe, in accordance with Brazil's constitution, that Lula, who has easily led all presidential election polls, shouldn't have been prevented from participating in the elections until all of his legal appeals have been exhausted.

Having received the political baton from the most popular politician in Brazil, Haddad concluded that his government wants to "reinforce the objective of wanting to build a country based on peace and harmony.  A government that's orientated towards the workers of Brazil."