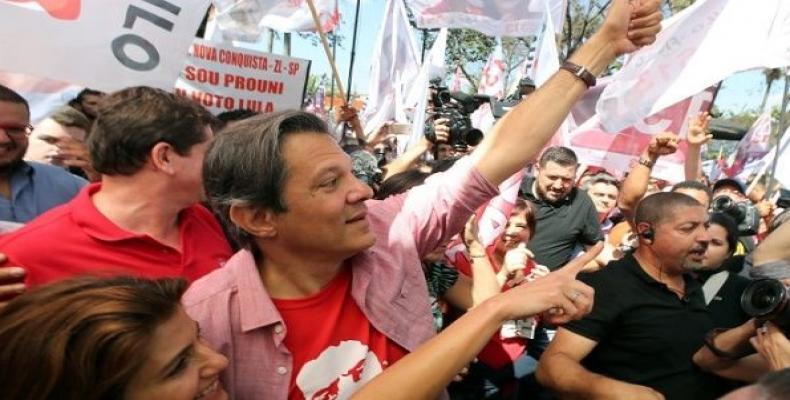 Brasilia, September 22 (RHC)-- Fernando Haddad, the presidential candidate for the Workers Party (PT) in Brazil has widened his support in the polls by three points since the last surveys were conducted for the presidential elections being held on October 7, according to the latest Ibope poll.

The pollster found that candidate Haddad has 19 percent support, 11 points up from the last survey taken a week ago immediately after being appointed as the PT’s presidential candidate instead of former Brazilian President Luiz Inacio Lula da Silva.

According to the results of this survey, Haddad comes in second place and would go to a second round to face far-right Jair Bolsonaro, the candidate of the Social Liberal Party (PSL).  With the recent Ibope poll, Haddad comes ahead Ciro Gomes of the Labor Democratic Party (PDL) and Gerardo Alckim of the Brazilian Social Democracy Party (PSDB) and Marina Silva of the Sustainability Network (REDE).

The company also polled potential voters for a second-round scenario and found that at this point Haddad and Bolsonaro are tied at 40 percent.

The news comes a day after Haddad met with Lula in the prison where he has been held since April on what experts deem a bogus and political conviction by judicial elites.  Haddad spoke of Lula's favorable impressions concerning recent polls showing him widening his support by the day.

Haddad says his government plan revolves around two emergency pillars: jobs and education.  To create more jobs and boost the economy, the former Minister of Education and mayor of Sao Paulo stressed the need for tax and bank reforms favoring the poor and middle class.  The move also envisages a greater capacity for public budgets, allowing federal, state and municipalities to spend more on job creation programs.

To improve public education, Haddad said his administration's priority would be to increase investment in teachers and underperforming public schools.  He mentioned that part of his plan includes ideas and initiatives put forth by Lula.

Many legal experts believe, in accordance with Brazil's constitution, that Lula, who has easily led all presidential election polls, shouldn't have been prevented from participating in the elections until all of his legal appeals have been exhausted.