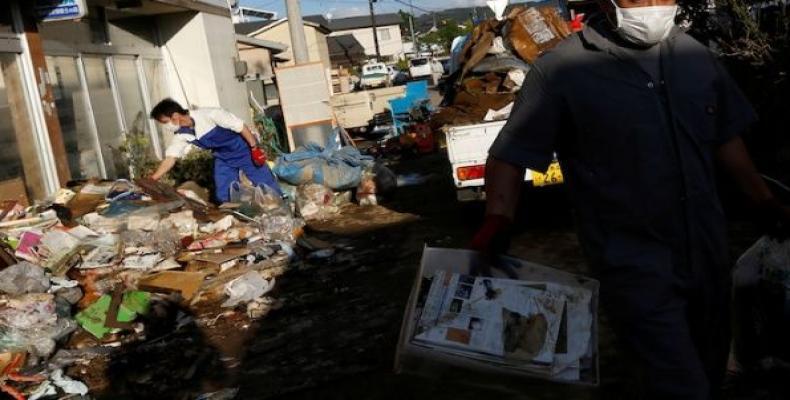 Tokyo, October 16 (RHC)-- The death toll in a powerful typhoon that hit Japan over the weekend mounted to 68 Tuesday as rescue teams continued searching for at least 15 missing people.

Severe flooding by record rains brought by Hagibis, the worst typhoon to strike Japan in decades, has complicated rescue efforts and prevented the authorities from taking stock of material and human damage.

More than 3,400 people, who were evacuated from their homes in the two regions, continued in temporary shelters, state-owned broadcaster NHK reported on Tuesday.

The highest toll was in Fukushima prefecture north of Tokyo, where levees burst in at least 14 places along the Abukuma River, which meanders through a number of cities in the largely agricultural prefecture. At least 25 people died in Fukushima, including a mother and child who were caught in flood waters, NHK said. Another child of the woman remains missing.

Fukushima is home to the Fukushima Daiichi nuclear power plant that was crippled by a 2011 earthquake and tsunami. Officials for Tokyo Electric Power Co, which owns the plant, have said there was no leakage of contaminated water.

The typhoon also triggered nearly 150 landslides in different parts of the country, destroying bridges and roads.

Power and water supplies were also cut in several areas, especially near rivers and canals. Most of the country's rail networks were running normally on Tuesday. But the high-speed link connecting Tokyo and Kanazawa (center), whose trains were flooded and damaged, was still shut. The service would take some time to repair, according to its operator, East JR.

Japanese Prime Minister Shinzo Abe said Tuesday that the government would use state funds kept for natural calamities to rebuild affected areas and provide assistance to victims, given that the impact of the disaster would be prolonged, according to Kyodo agency.