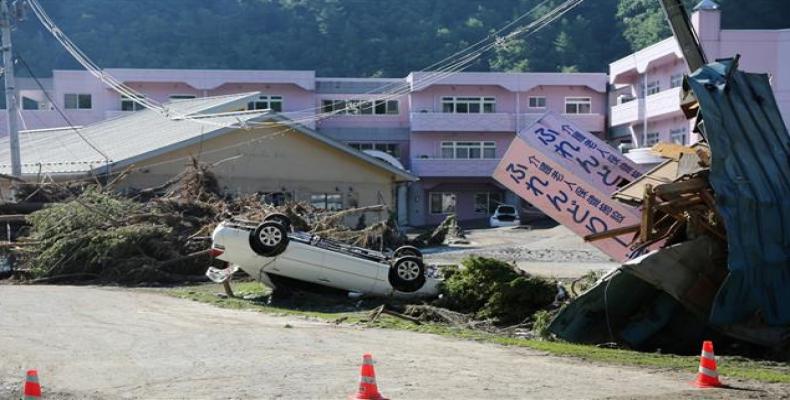 Tokyo, September 2 (RHC)-- A devastating storm in northern Japan has claimed the lives of at least 14 people and left more than 1,600 others stranded in the affected areas.  Typhoon Lionrock swept through the countrys northern Pacific coast on Tuesday evening, with powerful winds of up to 160 kilometers per hour and dumped torrential rain over the area.

Iwaizumi, the hardest-hit town in the area suffering flooding, has so far had 12 victims, nine of whom were buried inside a building of an elderly care facility.  The prefectural government said as of Friday, hundreds of people have been cut off in the communities in Iwate Prefecture.

Local officials have airlifted about 30 people in need of emergency help to hospitals in Morioka and other towns.

The county is being threatened by another tropical storm, Namtheun, which is expected to reach western Japan on Saturday.  Namtheun, is heading north toward the southern main island of Kyushu, with gusts of up to 180 kilometers per hour.

Japan's Meteorological Agency said that the intensity of Namtheun could peak at the equivalent of a Category 3 hurricane in the Atlantic or eastern Pacific oceans.  Japan has been hit by 12 typhoons only this season.  Early in August, Typhoon Mindulle forced airlines across the country to cancel a total of 387 flights, mostly to and from Tokyo's Haneda airport.